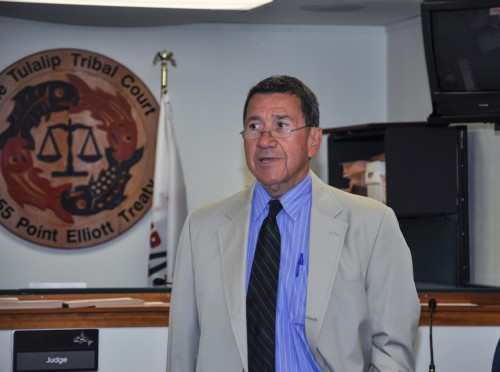 TULALIP – Honorable Judge Gary Bass, a Colville tribal citizen, has been a staple at the Tulalip Tribal Court for over a decade. He has witnessed the growth in staff, programs, and the selection of the court as one of three chosen as a pilot project to exercise special criminal jurisdiction as authorized by the Violence Against Women Reauthorization Act of 2013 over non-Indians regarding domestic violence.

Recently Judge Bass received a lifetime achievement award from the Northwest Indian Bar Association in recognition for his long-term work in Indian country. The award recognizes his 49 years of law practice and work with Native communities.  Tulalip News /See-Yaht-Sub was able to sit down with Judge Bass and discuss his work in Indian country and his retirement from Tulalip Tribal Court at the end of this year.

The decision to practice law

“I was a young officer in the Army, and when you are a young officer, people that are up for special courts marshals can request that they have an officer, even though they are not a lawyer, represent them. I did that a few times and I really enjoyed it. I had never thought about being a lawyer until that time. I had an old lieutenant colonel that was my regimental commander, I went to him and said, ‘you know, I am thinking about staying in the Army or I am going to law school.’ He said, go to law school. I never knew if that was a result of him thinking I was a lousy solider or he thought law school would be a better fit for me.”

The change from lawyer to judge

“I was in King County and I had a large practice. One of the court commissioners there asked if I would like to come and sit, as what they call a pro tem judge, in King County Superior Court on ex parte, and I said yes. I did that for 20 years, two to four days a month, and that was really the start of me being a judge. The reason I came here to Tulalip is because Mike Taylor called me, and said, ‘gee you know anybody that would like to come up here and sit as the criminal court judge three days a week?’ At that time I was thinking about going semi-retired, but I said, well sure. It was three days a week but immediately it became full time, and of course I have been here ever since. It has been a great ride. I have really enjoyed it. I had never thought about becoming a tribal court judge until Mike brought the issue up. It was a better fit than being in the Superior Court because I probably would have been appointed to the Superior Court as a minority candidate, but I didn’t really want to do that. So this was the best thing that could have happened to me.”

“At Tulalip Tribal Court we hear all kinds of cases. Everything you can think of, from child custody to youth-in-need-of-care cases to criminal and so forth. Our days are really pretty busy. We have ex parte that we have two times a week, where we sign orders for people that need to get orders signed for default divorces, guardianships, probates, restraining orders for domestic violence cases, and minor settlement, and once a week I have the domestic violence staff-in meeting. It gets busy.”

Law in Indian Country, what makes it so different

“Tulalip Chief Judge Theresa Pouley and I are Native Americans, and we look upon the folks that come before us in the courts differently than we would in state courts. In state courts you probably are never going to see the individual in front of you again. Here, we get so that we know all the people that come before us. We know their family and we know all the things about them. Of course we look upon them as judges, but you kind of look at it more as of an elder guide. Their welfare and everyone that comes before us is extremely important to us. It is a different relationship and you get to be a part of the community here.”

“The law is frequently the same, but the things that are different of course are elders are treated with respect. We like to let folks have their say in court, which a lot of times in state courts the things that we allow people to talk about would never ever happen. Native Americans were treated so badly by the courts and justice systems that it is important to us to let them have their say. Some things that are said are not necessarily relevant to the case, but they should be entitled to have their say. As a result, we have a different attitude towards them. We regard everybody here as our brothers and sisters, and we are responsible for trying to solve their problems.”

What Tulalip gave in return

“I was never a pow wow guy. My family lived on the [Colville] reservation and we did all the things that we normally do on the reservation, but we weren’t intimately involved in the cultural aspects of the tribe. So being here has made me more aware and respectful of all the traditions and culture of Native Americans. I have learned a lot that I never knew before. It has really been instructive to me as a Native American. As a judge, it has made me more understanding, and more willing to try to help people.  One of the things I have always said is, when we get done, nobody is going to have statues of us like people in Washington D.C. and we are not going to have books written about us; our main legacy is that we have made lives better for our Native American brothers and sisters. That is our legacy and that is what drives me to want to do this.”

“I received a lifetime achievement award from the Northwest Indian Bar Association. It is recognition for someone’s long-term work they’ve done in Indian Country. At this point I have been working in Indian country, either urban or with tribes, for 48 years, so it is in recognition of that. When I was in Seattle I was very active in the urban Indian community.”

“I also have a plaque from the Martin Dale Hubbell organization, which is a world wide organization that sends out surveys to judges and attorneys to anonymously rate people. This award says I am AV, which means I have the highest ranking in legal and ethical ability that they can give. For me that was a great honor because it is from your peers. “

“I am very satisfied with my career. I don’t think if I had to go back and do it again I would do anything any different. I have been very fortunate in a lot of ways, like coming here, I think that was the best thing that could have happened to me. I never had aspirations for being a Supreme Court judge, I always wanted to be a very good trial lawyer and I think I was. The crowning pinnacle of my career has been here at the Tribal Court, because hopefully I have helped make things better for Tulalip tribal members. The whole Court has contributed to the justice system here and the Tulalip Tribal Court is recognized through the nation as either one of the best or the best tribal courts in the nation. That is a result of the teamwork from the Board of Directors to all the departments, court staff and reservation attorneys. This Tribe should be proud of its court because it truly is one of the best.”