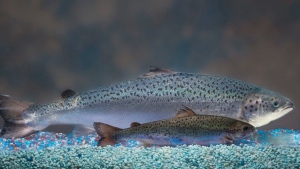 AquaBounty fish are genetically modified to grow twice as quickly as regular salmon. The salmon in the foreground is a natural Atlantic salmon, in the background is the AquAdvantage Transgenic salmon. Photo: AquaBounty Technologies

Salmon is a crucial resource for many Salish tribes, including the Tulalip people who are historically referred to as the Salmon People for their relationship to the salmon. But what happens when there are no more salmon returning? What happens to the culture and identity of the Tulalip Tribes? Today, the ongoing discussion over the fish consumption rate and the proposed increase in water pollution allowed in watersheds around Washington State pose real threats to the survival of wild salmon, and in turn the Tulalip way of life. The salmon resource is already at a high risk for extinction, with wild Chinook (King Salmon) and Steelhead runs recently added to the endangered species list. Over the last four years a new threat has grown very rapidly, skirting around cultural and environmental policies through an ongoing debate under the United States Food and Drug Administration (FDA). Genetically-engineered salmon, known as AquAdvantage Salmon, developed by AquaBounty Technologies, present risks to natural salmon production, the environment, and Tulalip culture and identity.

Mike Crewson of the Tulalip Tribes Natural Resource Department explained some of the immediate threats posed by AquAdvantage salmon.

“While genetically-modified agriculture has been permitted for years and engineered crops are widely used in processed foods, this would be the first genetically-modified animal allowed for human consumption in the United States.  Like other farmed fish, they will compete with the U.S. salmon market and tribal economies dependent on fishing, especially if the technology spreads,” he said.

AquAdvantage salmon are genetically-engineered using genes from different species of fish, not genetically modified through selective breeding techniques. AquaBounty uses a growth hormone gene from Chinook Salmon and a promoter gene from an eelpout (an eel-like fish) that speeds up the growth cycle. That combination of genetic code is then inserted into the DNA of Atlantic Salmon.  The eelpout gene keeps the Chinook growth-hormone gene producing year-round.  The result is an Atlantic salmon that grows to market size in 16-18 months rather than the three to five years required for Pacific salmon to reach full size. If the FDA approves genetically-engineered salmon for human consumption and they enter the market, they will be cheaper and grow much faster, which could decimate Puget Sound tribal economies and others dependent upon fishing.

The threat to genetic purity is crucial to realize in the genetically engineered salmon debate as well. A lawsuit recently filed in the State of Washington prevented the release of nearly one million hatchery steelhead throughout the state, under the guise of protecting natural steelhead runs from such consequences.

“The spotlight is on hatcheries right now, with particular undue scrutiny regarding the possible genetic effects hatchery fish could have on natural salmon populations. And that’s even when they come from the same stock as the wild fish,” explained Crewson. “State and federal regulators are even opposed to the transfer of native Pacific salmon between watersheds.  While fishermen and others remain unsure how this technology could compete with native Pacific salmon, especially if the technology spreads, it is highly doubtful that the fishery regulatory agencies would ever allow genetically-engineered salmon into a region with wild salmon populations.”

The FDA decided that AquAdvantage fish require no labeling, meaning that consumers would not know whether or not the salmon they purchase is genetically-engineered or modified. For the Tulalip Tribes, the salmon people, this poses a threat to the very essence of our cultural identity. Some would say, the general public has a right to know what they are eating, especially Tribal members who may buy salmon that they presume are native for cultural, subsistence, and religious purposes, such as the wild salmon celebrated at the annual First Salmon Ceremony.

“These cheaper, quickly-maturing, genetically-engineered salmon grown in hatcheries are just another gimmick that takes the focus off of the need to protect and restore salmon habitat and rebuild self-sustaining wild salmon populations. Essentially, this undermines the Tribes’ and other’s salmon recovery focus on rebuilding natural salmon runs by restoring habitat and protecting the environment needed to support healthy natural and hatchery production. There is not a need to develop genetically-engineered fish that live their whole life in hatcheries.  There is, however, a need to restore habitats and the environment to sustain long-term wild salmon populations to meet treaty-reserved harvest obligations,” Crewson said.

At the 40th Anniversary of the Boldt Decision in February, the late Billy Frank Jr. reiterated that the importance of protecting the future of the salmon resource was just as important as the right to harvest the resource. Because, if there is no resource, what good is your right?

To date, the Muckleshoot tribe is the only tribe in Washington State, if not the nation, to officially oppose the FDA consideration of genetically-engineered salmon for human consumption. The Affiliated Tribes of Northwest Indians and the National Congress of American Indians recently released official statements in support of Muckleshoot’s opposition.