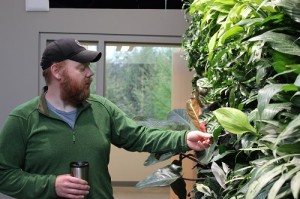 The Squaxin Island Tribe’s natural and cultural resources departments recently moved into a new building that reflects the tribe’s dedication to the environment and their own culture. The new office includes elements of green building and reflects the cultural identity of the tribe. “It literally looks like a long house,” said Andy Whitener, natural resources director for the tribe.

“We are the People of the Water,” said Whitener. “Every time someone comes in here, they’ll be reminded of that.” All of the rain hitting the roof of the building is routed to two water features that bookend the entrance of the building. The rainwater will flow down two slopes that look like of fish scales.

Even the heating system indoors – driven by warm water pumped through the floor – will be reminiscent of the tribe’s connection to water.

Several systems throughout the building are lighter on the earth than traditional buildings. For example, much of the light will come from natural lighting. “When there isn’t enough light outdoors, the building’s system will kick in more light to make up for it,” said Jeff Dickison, assistant natural resources director. “In the end, we’ll use a lot less electricity.”

The building’s impact on stormwater is decreased by two large rain gardens and a pervious pavement parking lot. “Instead of water flowing off the property, increasing floods and pollution, it will seep into the soil in a more natural way,” Dickison said.

Even the computer networking system makes it easier to manage the temperature inside the building. “This building won’t have one big server room that will need to be cooled, using a lot of electricity,” Dickison said. “We’re using a cloud based system, which will take that work totally off site.”

“We have dedicated staff that work hard to protect our treaty rights and preserve and protect out natural resources,” said Whitener. “It makes sense that our new building would reflect that mission.”