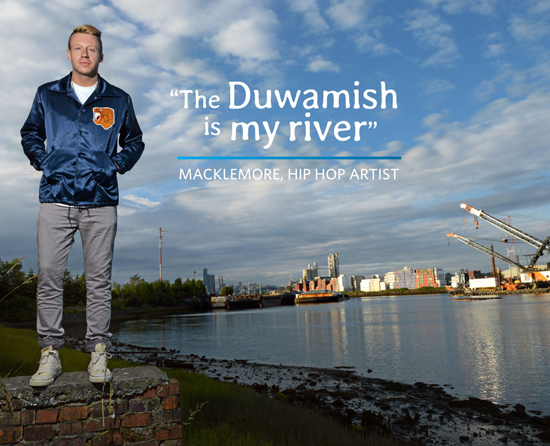 SEATTLE – A newly formed group of community leaders who say they represent residents, Tribes, workers, fishing families and others, is demanding a better cleanup plan for the Duwamish River.

The group kicked off its “River for All” campaign with a new billboard on Highway 99 South where it crosses the Duwamish. It features their celebrity member, Seattle hip hop artist Macklemore.

Macklemore released a statement on his website, saying “We are Seattle. No bridge, boundaries or invisible man-made lines divide us. This is our home, our people and our community. This is our city’s only river.”

Group member BJ Cummings said the current plan proposed by the EPA properly addresses removal or capping of hot pockets of contamination in the river but calls for a natural recovery method for less contaminated sites. That depends on the river use its natural downriver migration of clean silt to cover the toxic areas over time.

Cummings said that is not good enough to protect the health of the residents along the Lower Duwamish who already face higher pollution exposure rates than most parts of the city.

The EPA is working on a response but has not issued it yet.

Win a kayaking trip with Macklemore