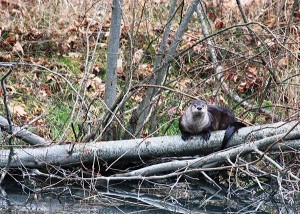 A river otter rests on a log in the Elwha River. Click the photo for more pictures from the three-year study. Photo: Lower Elwha Klallam Tribe

The Lower Elwha Klallam Tribe is wrapping up its four-year study on river otters and American dippers in the Elwha River watershed.

The tribe has been studying how the animals use the river for food and habitat and how those needs have been impacted by the recent removal of the river’s Elwha and Glines Canyon dams.

Since the early 20th century, the dams prevented salmon from spawning beyond the first five miles of the river, denying wildlife an important food source. The upper watershed also was deprived of the marine-derived nutrients that salmon carcasses provide to the surrounding ecosystem.

As the dams have been removed and salmon have been able to move upriver, the otters and dippers have been taking advantage of the new resources, said Kim Sager-Fradkin, the tribe’s wildlife biologist.

Between 2011 and 2014, blood, feather, toenail and tissue samples were collected for genetic and diet analysis. The tribe also tagged 11 otters with radio tracking devices and tagged 246 dippers with small leg bands to track migration patterns.

“Despite disruptive dam removal activities, at least one tagged otter continued to frequent areas around Glines Canyon Dam,” said Sager-Fradkin. “Sediment loads in the river, however, appeared to impact which areas of the river that otters used, with otters using more side channel, tributary and saltwater habitats during periods of high sediment loads in the river channel.“Overall though, we found most of them moving throughout the Elwha watershed and Strait of Juan de Fuca, from as far south as the Glines Canyon dam when it was still fully intact, to as far north and east as Port Angeles harbor.”

Dippers also used tributary and side channel habitats during dam removal and increased sediment loads in the river, she added.

Analyses of the animals’ diets showed that both otters and dippers are eating more marine-derived nutrients now than before the dams started to come down.

“Presumably this is either through direct consumption of salmon or through consumption of aquatic macroinvertebrates that have become enriched with marine-derived nutrients,” she said.