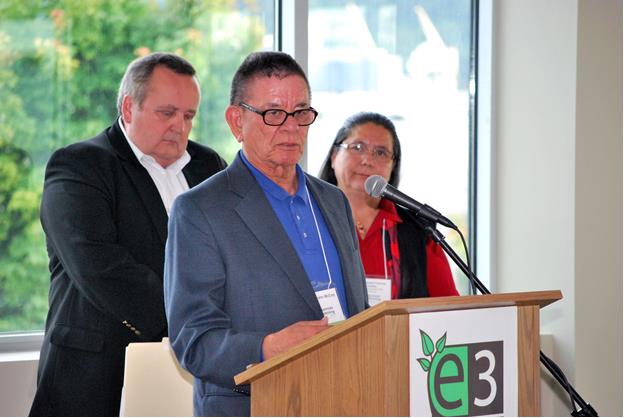 Senator John McCoy (D) of Tulalip honored with the E# award for Diversity in Action. McCoy was one of three tribal recipients in Washington State honored for his work in employing diversity to reach a more sustainable future.
Photo courtesy of E3

Senator John McCoy received the Diversity in Action-Individual E3 Washington Green Apple Award on June 26 for his work in environmental education. He has in mind education for the environment to be incorporated throughout all levels of learning, including post-secondary education programs. While protecting the environment is mutually beneficial, it is often a sensitive subject with specific community concerns attached. McCoy, a member of the Tulalip Tribes, is diligent in making sure that each diverse community is represented in every issue, working to set attainable goals for sustainability on  that everyone can agree on.

Steve Robinson, an Olympia based businessman who nominated McCoy, said, “Senator McCoy has been a tireless leader in many capacities which have served environmental education, multiculturalism and diversity well. His presence on ‘the hill’ in Olympia has provided an immeasurable amount of benefit to both tribal and non-tribal people and governments. He has sponsored phenomenal, far-reaching legislation, ranging from bills to integrate Indian culture and history into the classroom to a bill to establish Indian Heritage Day. Senator McCoy is one of the hardest working legislators in Olympia and he is committed to the protection and restoration of a healthy, vibrant environment for all.”

In addition to advocating for culturally sensitive environmental education, McCoy is tenacious and steadfast in his opposition of bills that would be potentially harmful to the environment, working to block them as much as possible.

“Last year, I successfully blocked legislation that would have allowed for water to be repurposed without regulation. This prevented water allocated for personal or agricultural purposes from being repurposed and used commercially, which would have created a loophole in current regulations,” said McCoy.

The work McCoy does to contribute to education for the environment, in addition to the work to prevent detrimental legislation, represent the magnitude of his career. According to the E3 statement, the Washington Green Apple award for Diversity in Action, “recognizes an individual, organization, tribe or program that demonstrates cultural awareness and encourages a multicultural approach to environmental and sustainability education programs while exemplifying the Lead Green goal.”

McCoy said, “I am honored to receive this award, and thankful for the recognition of the magnitude of work I have been involved with.”

While recognized for his work in environmental education, McCoy’s career has centered on water issues. He is also a strong proponent in Washington of legislation promoting the research and use of alternative energy, working to pass i937 last year, which deals with the state’s Renewable Energy Portfolio and standards on greenhouse gasses.