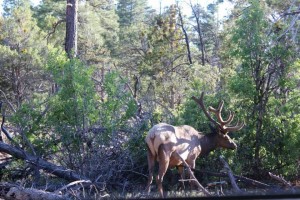 The Cachil Dehe Band of Wintun Indians hopes Tule elk will return home to their reservation land. The tribe received $89,200 in grant funding from the U.S. Fish and Wildlife Service, through the organization’s competitive Tribal Wildlife Grants Program, to restore elk habitat on its 7,000-acre property in Colusa County, California.

Roughly three herds are roaming about three to four miles outside the tribe’s ranch currently, but their range expansion has been limited by chamise, the native evergreen shrub that formerly grew extensively on the ranch before a 2012 fire burned it out. “Now that the fire’s gone through, it may open up the [elk’s] migration patterns,” Casey Stafford, director of land management for the Cortina Ranch, told newsreview.com. “We’re just going to try to get them a new place to call home.”

The U.S. Fish and Wildlife Service awarded 25 grants nationwide to federally recognized tribes in 15 states, including five in California, to fund a wide range of fish and wildlife conservation projects.

“Tribal nations share our conservation challenges in the United States,” said Service Director Dan Ashe. “The Tribal Wildlife Grants Program creates opportunities for tribes to build conservation capacity and for us to work together in a variety of ways, including species restoration, fish passage, protection of migratory birds and efforts to cope with the long-term effects of a changing climate.”

Tribes have received more than $64 million through the Tribal Wildlife Grants Program since 2003, providing support for more than 380 conservation projects administered by participating federally recognized tribes. These grants provide technical and financial assistance for development and implementation of projects that benefit fish and wildlife resources, including nongame species and their habitats.

The grants provide tribes opportunities to develop increased management capacity, improve and enhance relationships with partners (including state agencies), address cultural and environmental priorities and heighten tribal students’ interest in fisheries, wildlife and related fields of study.  A number of grants have been awarded to support recovery efforts for threatened and endangered species.

The grants are provided exclusively to federally recognized tribal governments and are made possible under the 2002 Related Agencies Appropriations Act through the State and Tribal Wildlife Grants Program. Proposals for the 2015 grant cycle are due Sept. 2, 2014.

For information about projects and the Tribal Wildlife Grants application process, visit http://www.fws.gov/nativeamerican/grants.html.

Tulalip Tribes of Washington ($99,822)
Monitoring Fish and Water Resources on the Tulalip Tribes Indian Reservation, Usual and Accustomed Lands, and Marine Waters of the Pacific Northwest