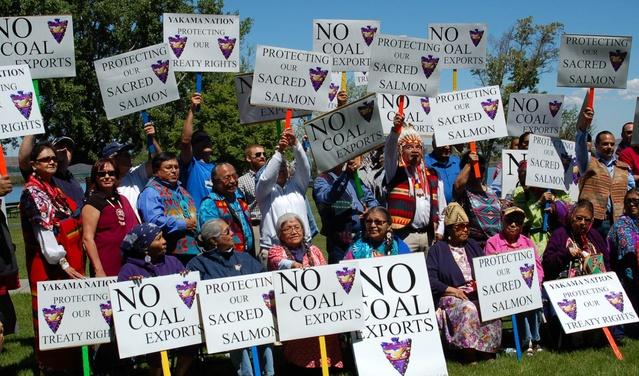 About 70 people gathered in May, 2014 to protest the proposed coal export facility in Boardman, Oregon. Yakama Nation and Lummi Nation tribal members spoke at a ceremony before people fished at treaty-protected fishing sites. | credit: Courtney Flatt

The Confederated Tribes of the Umatilla Indian Reservation have a message for coal shippers: their fishing rights are not for sale.

This blunt response comes after two years of talks between the tribes and Ambre Energy – the company that wants to build a coal export terminal on a part of the river that the tribes consider historic fishing grounds protected by their treaty with the federal government.

For Ambre’s export terminal, 8.8 million tons of coal per year would be transported by rail from Montana and Wyoming to Boardman, in Eastern Oregon. From there, it would be barged down the Columbia River and transferred to ocean-going vessels to be shipped to Asia.

Ambre Energy has offered to pay the tribe up to $800,000 per year (the same amount it’s offered the Morrow and Columbia County school districts). The company is also offering $500, 000 toward salmon and stream enhancements and $100,000 toward culture and history celebrations during the Morrow Pacific Project’s construction.

A tribal spokesman said the tribes have been in discussions with Ambre Energy for two years. Chuck Sams said that’s when the tribe began raising concerns about treaty fishing sites near the company’s proposed dock.

“We will not abdicate, nor will we trade, any of our treaty rights,” Sams said. “We’ve already proven to them time and time again that the place where they wish to site their facility is a usual and accustomed fishing station.”

Sams said there is no way Ambre could make up for damage that could be done to the fishing site because people fish there now.

Members from the Yakama Nation and the Lummi Nation recently held fishing demonstrations at the site where the coal terminal construction is proposed.

An Ambre Energy spokeswoman says the company chose this site specifically because it did not impact fishing sites.

“It’s important to remember that the proposed dock is on private Port of Morrow property in between two existing docks. And even with that, from the beginning we have sought a partnership with the tribes based on mutual respect, shared benefits, collaboration, and cooperation,” said spokeswoman Liz Fuller.

Sams said no formal reply to the company is in the works because the Umatilla tribes have already expressed concerns to Ambre Energy in face-to-face meetings.

Sams went on, however, to say the Umatillas are open to further discussions.

Referring to offers from Ambre Energy, Sams said, “I think that they read the public wrong – our public, our tribal citizens – and where we stand. The tribal members themselves are pretty strong on environmental issues, especially in protection of their treaty rights. … Putting out a letter that dangled out financial gain for the tribe really does not resonate well within the tribal membership.”

The Australia-based Ambre Energy is still waiting on a permit from the Oregon Department of State Lands to build the dock at its Boardman site. The permit decision has been delayed multiple times. Right now a permitting decision is scheduled for Aug. 18.

According to DSL rules, the permit can be issued if the dock doesn’t “unreasonably interfere” with preservation of water for navigation, fishing and public recreation.