One of the lowest tides of the year this weekend revealed a “crime scene” at the beach at Golden Gardens Park in Seattle.

The victims: thousands of clams that died in the prime of their lives. Each bivalve victim has a tiny hole drilled near its hinge.

Also strewn on the beach were gray rubbery things that looked like toilet plunger heads. The Beach Naturalists from the Seattle Aquarium say concerned citizens have collected them in buckets, upset that someone would have dumped so much litter on the beaches.

But it turns out that the holes and the toilet plunger heads are all the products of a little-known predator: the moon snail. 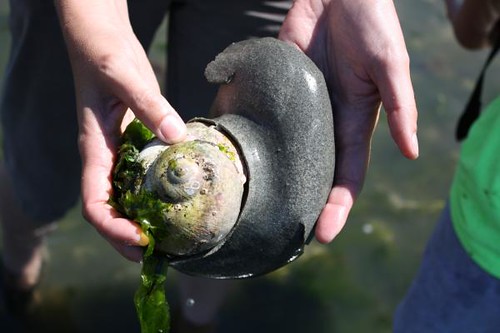 The culprit: Not a toilet plunger head, but the predatory moon snail. Credit KUOW Photo/Joshua McNichols

When it comes to the moon snail, Seattle Aquarium Beach Naturalist Will Downs is unwavering when he describes how the moon snail treats its victims: The snail “doesn’t see his prey. He feels them. He tastes them. And if you’re a clam, he sneaks up on you and engulfs you.” 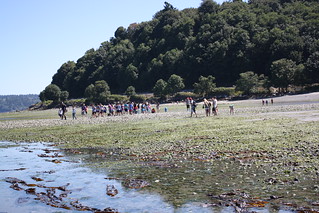 It gets worse. If the snail can’t smother the clam then and there, it drills through the clam shell with its bony, barbed tongue. That specialized tongue slowly files away at the clam, “day after day sometimes, until it can reach the interior, where the clam thought it was safe. Then it extrudes in there acids, enzymes, anything that’ll digest the clam.”

Downs grins as he delivers his punch line: “…and then it slurps up its own clam chowder.”

And those rubbery things that look like toilet plunger heads? Downs says they’re moon snail egg collars. The snail squeezes out the leathery substance by fusing together eggs, sand and its own mucus. As the egg collar emerges, it wraps around the moon snail’s shell, taking on the shell’s shape.

Before we condemn the moon snail, Seattle Aquarium naturalist Darcie Larson said the moon snail may be vicious predators of clams, but they’re an important part of the beach ecosystem of Puget Sound.

“If we had no predators, we might have too many shellfish. And then the shellfish population would get out of balance,” she said. “And they would eat up all the food, all the plankton in the ecosystem. We refer to predators like that as keystone species, and they hold the whole system together.”

So are moon snails threatened? Larson said anecdotally, the moon snails are doing well. Which is good, as other predators, such as sunflower sea stars, are currently suffering from a mysterious wasting disease.