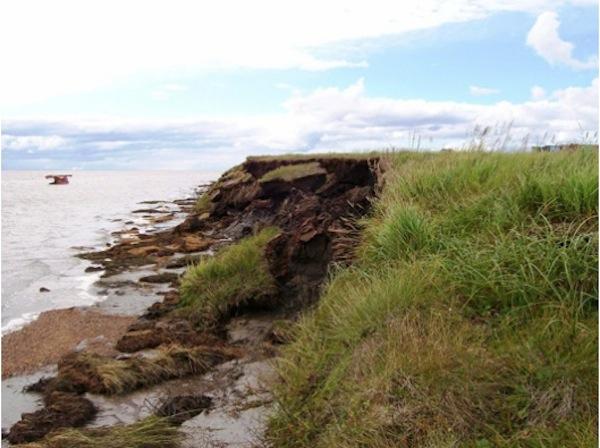 Newtok Planning Group
The Alaska Native village of Newtok is one example of an indigenous community at the forefront of climate change. Erosion due to rising sea levels has required the relocation of the entire village.

President Barack Obama on July 16 released another set of climate-change-resilience guidelines, this batch geared specifically toward tribes, and announced the allocation of $10 million to help tribes cope with climate change.

The allocation was one of a number of measures announced at the final meeting of the White House State, Local, and Tribal Leaders Task Force on Climate Preparedness and Resilience, created by Obama last fall. Karen Diver, chairwoman of the Fond du Lac Band of Lake Superior Chippewa in Minnesota, and Reggie Joule, mayor of the Northwest Arctic Borough in Alaska, were the tribal officials designated to serve on the task force.

The money will fund the development of resource management methods, climate-resilience planning, and youth education and empowerment. Climate adaptation grants will also be awarded for the development of climate-adaptation training programs, assessment of vulnerability, monitoring and other aspects of learning about the effects of climate change. Adaptation planning sessions will be offered, and tribal outreach will be funded with the money as well, Interior said. Administration officials said such measures are sorely needed.

“From the Everglades to the Great Lakes to Alaska and everywhere in between, climate change is a leading threat to natural and cultural resources across America, and tribal communities are often the hardest hit by severe weather events such as droughts, floods and wildfires,” said Secretary of the Interior Sally Jewell, chair of the White House Council on Native American Affairs, in a statement. “Building on the President’s commitment to tribal leaders, the partnership announced today will help tribal nations prepare for and adapt to the impacts of climate change on their land and natural resources.”

Obama has been highlighting the effects of climate change on Native peoples in his efforts to construct a plan for dealing with the inevitable changes.

“Impacts of climate change are increasingly evident for American Indian and Alaska Native communities and, in some cases, threaten the ability of tribal nations to carry on their cultural traditions and beliefs,” said Assistant Secretary of Indian Affairs Kevin Washburn. “We have heard directly from tribes about climate change and how it dramatically affects their communities, many of which face extreme poverty as well as economic development and infrastructure challenges. These impacts test their ability to protect and preserve their land and water for future generations. We are committed to providing the means and measures to help tribes in their efforts to protect and mitigate the effects of climate change on their land and natural resources.”

The Interior Department will also team up with the U.S. Environmental Protection Agency (EPA) to create a subgroup on climate change under the White House Council on Native American Affairs, the DOI said. This cooperation between Jewell and EPA Administrator Gina McCarthy will entail working with tribes to pool data and information on climate change effects that are directly relevant to issues faced by American Indians and Alaska Natives. Traditional and ecological knowledge will be a cornerstone of the initiative.

“Tribes are at the forefront of many climate issues, so we are excited to work in a more cross-cutting way to help address tribal climate needs,” said McCarthy in the statement. “We’ve heard from tribal leaders loud and clear: when the federal family combines its efforts, we get better results—and nowhere are these results needed more than in the fight against climate change.”