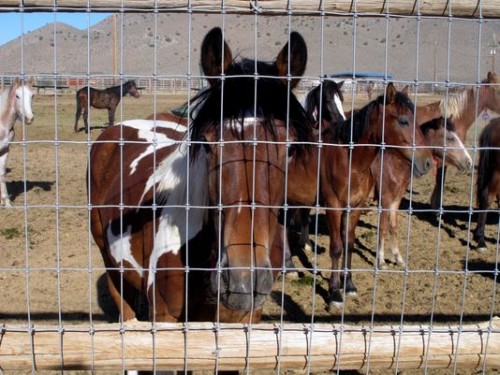 This 2013 file photo shows some of the hundreds of mustangs the U.S. Bureau of Land Management removed from federal rangeland. (Photo: Scott Sonner/AP file photo )

A Utah representative has introduced legislation to allow Western states and American Indian tribes to take over management of wild horses and burros from the federal government.

U.S. Rep. Chris Stewart said the U.S. Bureau of Land Management has mismanaged the animals on public rangelands and states should have the option of managing them.

An overpopulation of horses is pushing cattle off the range, the Republican lawmaker said, and leading to the destruction of important habitat for native species.

“States and tribes already successfully manage large quantities of wildlife within their borders,” Stewart said in a statement. “If horses and burros were under that same jurisdiction, I’m confident that new ideas and opportunities would be developed to manage the herds more successfully than the federal government.”

But Anne Novak, executive director of California-based Protect Mustangs, said her group opposes the legislation because it would lead to states and tribes killing the animals or selling them off for slaughter for human consumption.

The government is rounding up too many mustangs while allowing livestock to feed at taxpayer expense on the same rangeland scientists say is being overgrazed, she said.

“We’ve had firsthand experience with states and tribes managing wild horses, and it’s horribly cruel,” Novak said in a statement. “They ruthlessly remove wild horses and sell them to kill-buyers at auction. Severe animal abuse would be the result of the (legislation).”

The Bureau of Land Management says it’s doing all it can, given budget constraints, overflowing holding pens and a distaste for the politically unpopular options of either ending the costly roundups or slaughtering excess horses.

The bill’s introduction comes at a time when the bureau has been under increasing pressure from ranchers to remove horses that they say threaten livestock and wildlife on rangelands already damaged by drought.

In Utah, Iron County commissioners had threatened to gather up hundreds of mustangs themselves, saying the government refuses to remove enough horses in herds that double in size every five years.

Iron County Commissioner Dave Miller said he and commissioners from Utah’s Beaver and Garfield counties are trying to drum up support for a resolution in support of the legislation at the National Association of Counties annual conference in New Orleans, which ends Monday.

“The resolution will be instrumental in getting Chris Stewart’s bill through Congress because it shows support across the nation,” he told the Spectrum in St. George, Utah.

Stewart said his Wild Horse Oversight Act would extend all protections that horses and burros enjoy under the federal Wild Free-Roaming Horses and Burros Act of 1971 while giving states the opportunity of implementing their own management plans.

Under the bill, the states could form cooperative agreements to manage herds that cross over borders, and the federal government would continue to monitor horses and burros to ensure that population numbers as prescribed by the 1971 act are maintained.

The bureau estimates 40,600 of the animals — the vast majority horses — roam free on bureau-managed rangelands in 10 Western states.

The population exceeds by nearly 14,000 the number the agency has determined can exist in balance with other public rangeland resources and uses.

Some 49,000 horses and burros removed from the range are being held in government-funded short- and long-term facilities.