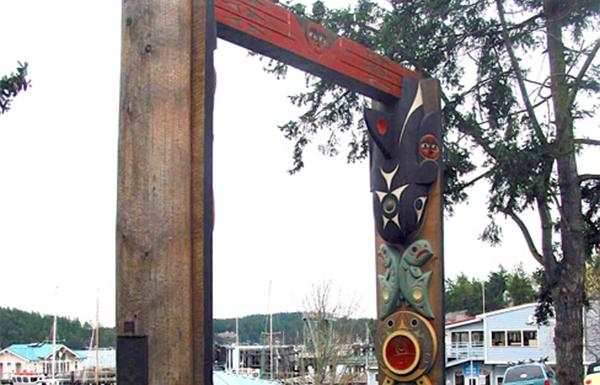 Residents of San Juan Island, Washington, the original home of the Lummi, Samish and Songhees peoples, are raising money for the care and preservation of house posts that overlook the harbor in the port town of Friday Harbor.

The house posts were carved by noted artist Susan Point, Musqueam, and acquired by residents 10 years ago to publicly honor the indigenous heritage of the island. The house posts, titled Interaction, tell the story of the interdependence of humans and animals in caring for the environment that sustains them.

“From the time of its unveiling, Interaction has become a gathering place for islanders and visitors—especially children, awed by the sculpture’s size, engaging motif, and deep, colorful carvings,” Barbara Marrett writes, in an article posted to SanJuanJournal.com. “Because children are drawn to touching the cougar scratches on the woman’s leg, over the years the paint and wood [have] been worn down in this area and other places where they have been loved and climbed upon.”

The house posts will be restored and repainted by a team of artists from Point’s studio. A community/Tribal celebration will follow the completion. Questions: Linda@sjihome.com.