CUNINICO, Peru – On the last day of June, Roger Mangía Vega watched an oil slick and a mass of dead fish float past this tiny Kukama Indian community and into the Marañón River, a major tributary of the Amazon.

Community leaders called the emergency number for Petroperu, the state-run operator of the 845-kilometer pipeline that pumps crude oil from the Amazon over the Andes Mountains to a port on Peru’s northern coast. 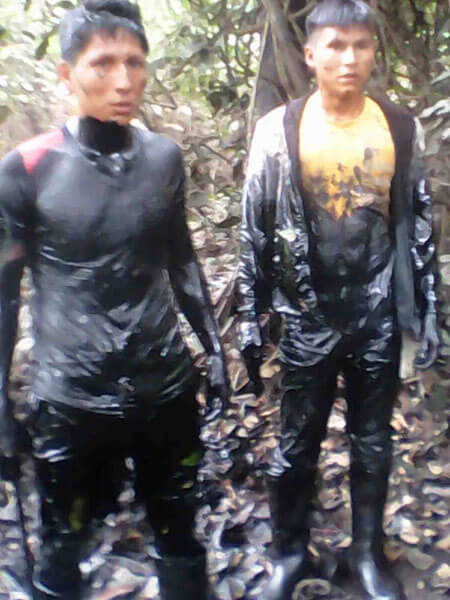 Local men were covered with oil after being hired to find the leak in the submerged pipeline. (Photo: Municipality of Urarinas)

By late afternoon, Mangía and a handful of his neighbors – contracted by the company and wearing only ordinary clothing – were up to their necks in oily water, searching for a leak in the pipe. Villagers, who depend on fish for subsistence and income, estimated that they had seen between two and seven tons of dead fish floating in lagoons and littering the landscape.

“It was the most horrible thing I’ve seen in my life – the amount of oil, the huge number of dead fish and my Kukama brothers working without the necessary protection,” said Ander Ordóñez Mozombite, an environmental monitor for an indigenous community group called Acodecospat who visited the site a few days later. 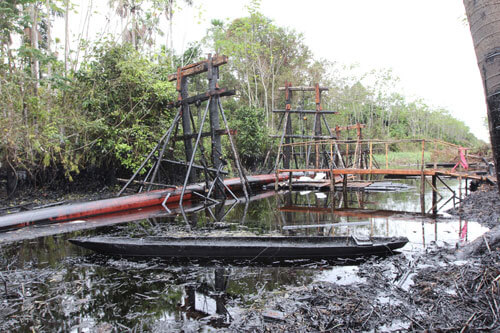 This rupture of Peru’s 39-year-old northern crude oil pipeline has terrified Kukama villagers along the Marañón River. People’s complaints of nausea and skin rashes are aggravated by nervousness about eating the fish, concerns about their lost income and fears that oil will spread throughout the tropical forest and lakes when seasonal flooding begins in November. Cuninico, a village of wooden, stilt-raised, palm-thatched houses, is home to about 130 families but several hundred families in other communities also fish nearby.

Three weeks after they discovered the spill, the villagers still have more questions than answers about the impacts.

“It sounds like an environmental debacle for the people and the ecosystem,” said David Abramson, deputy director of the National Center of Disaster Preparedness at Columbia University’s Earth Institute in New York.

“There is a need for public health and environmental monitoring at a minimum of four levels – water, fish, vegetation and the population,” he said. 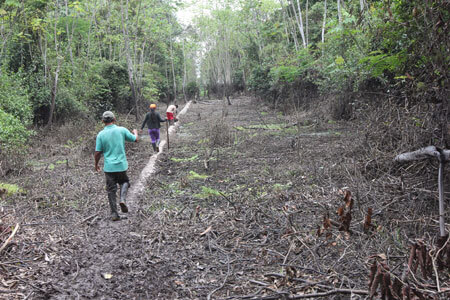 Company officials at Petroperu did not return phone calls and emails seeking comment.

Government officials have not officially announced how much crude oil spilled. However, in a radio interview, Energy and Mines Minister Eleodoro Mayorga mentioned 2,000 barrels, which is 84,000 gallons.

Indigenous leaders noted that the pipeline, which began operating again July 12 after the repairs, has a history of leaks.

Leaders of at least four neighboring communities said masses of dead fish appeared in lagoons and streams in the week before the oil spill was reported, indicating that it could have been leaking for days before it was spotted.

Even fish that escaped the worst of the spill could be poisoned, experts said. Fishermen who traveled an hour or two up the Urituyacu River, a tributary of the Marañón, in search of a catch unaffected by the spill returned with fish that they said tasted of oil.

Key concerns include polycyclic aromatic hydrocarbons (PAHs), which are classified as probable human carcinogens and can cause skin, liver and immune system problems, according to the U.S. Centers for Disease Control and Prevention. Exposure to PAHs in the womb has been linked to effects on children’s brain development, including learning and behavioral changes.

“The rule of thumb is that during the spill it’s a horrible mess, and two or three years later it’s hard to find evidence.” –Edward Overton, Louisiana State University For pregnant women, the fish become a “double-edged sword,” Abramson said. “They need that protein source to enhance the neurological development of the fetus, but at the same time, you don’t want them ingesting things that have unknown impacts.”

Mothers said children and adults in their families are suffering from stomachaches, nausea, vomiting and dizziness, and small children have skin rashes after bathing in the rivers.

In this part of the Marañón valley, the nearest health center is more than an hour away by boat and does not have a doctor.

The government’s Environmental Evaluation and Oversight Agency (Organismo de Evaluación y Fiscalización Ambiental, OEFA) has taken no samples of fish tissue for testing, according to Delia Morales, the agency’s assistant director of inspection.

Much of the oil settled in pools along the pipeline during the flood season, creating a viscous soup where dying fish flopped weakly. Government officials said damage was limited to a 700-meter stretch along the pipeline. The ground and tree trunks in the forest on both sides of the pipeline were also stained with oil, in a swath local residents estimated at up to 300 meters wide. When that area begins to flood again in November, villagers fear that contamination could spread. 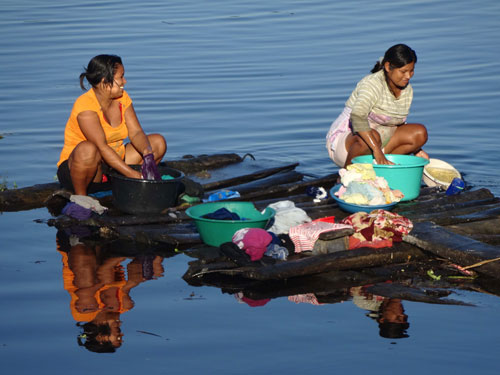 Petroperu hired men from the village of Cuninico to find the leak and raise the pipeline out of the canal to repair it. Several of the men said they were up to their necks in oily water, working in T-shirts and pants or stripped to their underwear. They said they received protective gear only when a Peruvian TV crew arrived more than two weeks later. The July 20 newscast led to a shakeup in Petroperu’s leadership.

Meanwhile, the workers’ wives wash their clothes in the Marañón River, squatting on rafts moored along the bank. Besides being the only transportation route in the area, the river is the source of water for drinking, cooking, bathing and washing.

Within a week after the spill, the local fish market had dried up. Women who normally sold 10 to 20 kilos of fish a day said their usual buyers shunned them. Children in Cuninico told a reporter from Radio Ucamara, a local radio station, that fish had disappeared from the family table and they were eating mainly rice and cassava, a root.

Abramson said the villagers’ mental health can be undermined by poor diet, income loss and conflicts between community members.

The pipeline has been repaired and the oil is flowing to the port again, but the long-term impacts of the spill are uncertain. 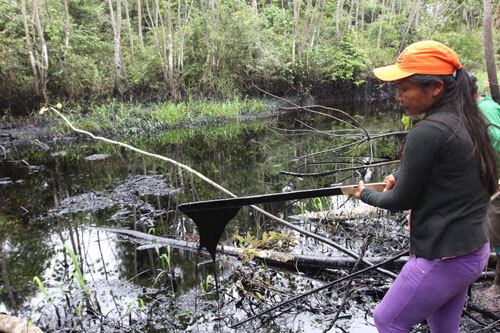 Glob of oil drips from a stick dipped into a pool beside the submerged pipeline. (Photo: Barbara Fraser)

Light and bacteria help break down oil naturally, said Edward Overton, a chemistry professor in Louisiana State University’s Department of Environmental Studies who has studied the Deepwater Horizon oil spill in the Gulf of Mexico. Volatile substances in the oil, which dissolve readily in water, could have caused the fish kills if the pipeline had been leaking for a time before the spill was reported, he said.

“The rule of thumb is that during the spill it’s a horrible mess, and two or three years later it’s hard to find evidence,” Overton said.

But that may not be the case in Amazonian wetlands, where clay soil and high water limit the oxygen available to oil-eating microbes, said Ricardo Segovia, a hydrogeologist with E-Tech International.

The government’s environmental agency is expected to issue its report on the spill by the end of this month and could levy fines, Morales said.

Villagers are waiting to see whether the government will sanction its own pipeline operation and pay damages.

“It sounds as though the state is in a precarious position,” Abramson said. “It [the government of Peru] has to monitor and assure the health and well-being of the population, but it may be one of the agents that is liable [for the spill]. They have to monitor themselves and decide what is fair and equitable.”