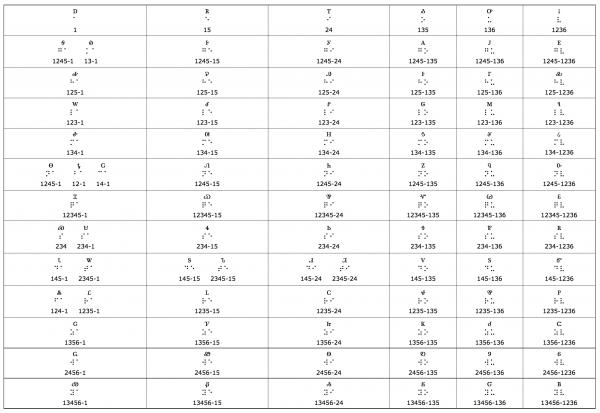 Cherokee Nation
Image of Cherokee in Braille, which is now available from the Commonwealth Braille and Talking Book Cooperative.

The Cherokee Nation now has its written language, the Cherokee syllabary, available in Braille.

“All Cherokees, regardless of any physical impairment, should be able to read and understand documents and signage in their native language,” said Cherokee Nation Principal Chief Bill John Baker. “Our language programs keep evolving to meet every Cherokee’s needs, whether they are an elder, a young person or someone who is visually or otherwise impaired.”

The tribe’s fluent Cherokee speakers in the Cherokee Language Program partnered with the Commonwealth Braille and Talking Book Cooperative earlier this year to develop a Cherokee version of Braille. Dot patterns were derived from the 86-character Cherokee syllabary.

“It’s exciting that our Cherokee citizens who are visually impaired can now read stories in their first language,” said Roy Boney, language program manager. “We provided copies of our Cherokee syllabary, sample text and other items to be able to make Braille in Cherokee a reality. We want to stay in the forefront by offering the Cherokee language on as many written tools as possible to preserve and protect our native tongue.”

The Cherokee writing system has been in use since its invention by Sequoyah in 1821. Every major technology since then, ranging from the printing press, typewriter and word processor to fonts on the latest computers and smart phones, has adopted Cherokee.

The tribe has translated Cherokee for Apple, Microsoft and Google products.

RELATED: Google it in Cherokee

Cherokee was initially encoded into Unicode, the international standards body that governs how all written languages are used on computer operating systems, in 2000. With the large volume of languages in the Unicode system, however, it wasn’t until now that Cherokee Braille was made compatible with the Braille system.

Now that Cherokee Braille is available, the raised, physical tactile print can be made using special printers.

The Commonwealth Braille and Talking Book Cooperative also developed a program that will convert typed Cherokee syllabary into print-ready Braille so that existing Cherokee documents can easily be converted into tactile books for the blind and visually impaired.

For more information about Cherokee Braille, visit the CBTBC’s website.