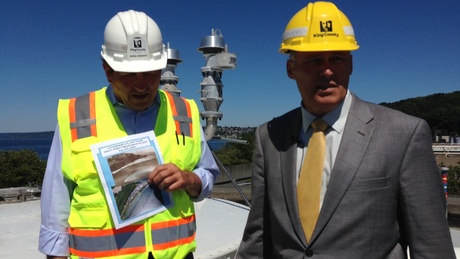 Dan Grenet (left), the manager of Seattle’s West Point Wastewater Treatment Plant, leads Wash. Gov. Jay Inslee of a tour. The visit was intended to highlight the costs of climate change; in this case, as a result of seawater incursion at the facility. | credit: Ashley Ahear

SEATTLE — When Washington Gov. Jay Inslee wanted to show the connection between climate change and an unpleasant and costly consequence for his constituents, he decided to tour a sewage treatment plant.

Inslee’s visit Tuesday to the West Point Wastewater Treatment Plant in Seattle’s Discovery Park was the latest stop on his statewide tour to raise awareness about the costs of climate change.

The problem the governor wanted to highlight: climate change is causing sea levels to rise. And that means homes and buildings that were built a safe distance from the water’s edge are increasingly becoming too close for comfort.

That message was also delivered by the White House Tuesday, when it issued a report that said global sea levels are currently rising at more than an inch per decade — and the rate appears to be increasing.

No one complained about the smell as treatment plant workers and managers led Inslee and other visitors through the facility. But there was a lot of talk about the problems with rising sea level.

Dan Grenet, the manager of the facility, showed Inslee some photographs hanging in the lobby. Waves crash over a cement wall.

“This is a photograph of Puget Sound coming into our facility – causes big problems in our pumps and piping systems and also, it’s a biological process here,” Grenet told the governor. “It doesn’t do well with salt water. Causes big problems.”

Saltwater intrusion could cost King and other shoreline counties tens of millions of dollars in infrastructure upgrades.

But during this visit, as with other stops on his climate change tour, the governor emphasized that the costs of climate change will hit from all directions.

“We’ve had $50 million in costs for fighting fires. Tens of millions of dollars of damage to the oyster industry,” Inslee said. “And here we don’t have an estimate at West Point but we know it’s significant because we know it’s not just this point its all these ancillary pumping stations that are going to have to be if not rebuilt, refortified to deal with sea water intrusion.”

Inslee’s latest task force on climate change has been charged with developing a plan to put a price on CO2 emissions. The plan is expected be presented to the state Legislature this fall.