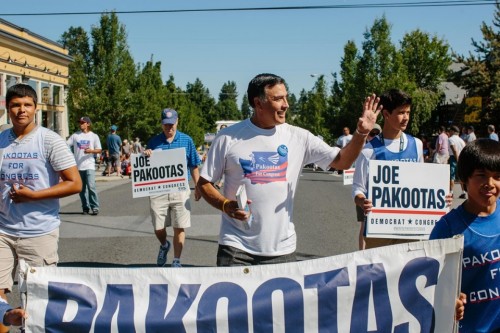 Editor’s note: This is the second in a series of profiles of people running for office in America who are unlikely to win, but who believe so strongly in their cause that they still try. The first profile, on Bruce Skarin’s efforts in Massachusetts, can be read here.

SPOKANE, Wash. — Ever since Lewis and Clark rolled down the mighty Columbia with a presidential writ, politicians and the judges they appoint have controlled the fortunes of Joe Pakootas’ people. Executive orders confined his ancestors to the Colville Reservation, acts of Congress deprived them of gold-rich foothills, and federal judges ruled from afar about their basic rights as Americans. Now, for the first time ever, a registered tribal member is making a serious bid to represent the people of Washington state’s 5th District in Congress. Running against incumbent Cathy McMorris Rodgers is none other than Joe Pakootas.

It is a tough challenge. Not only is Pakootas (pronounced pah-KOH-tas) running as a Democrat in a deeply conservative district, but his main opponent is also the kind of blandly affirmative incumbent who is particularly hard to unseat. McMorris Rodgers is running for her sixth term and is the fourth-ranking House Republican. She’s a hard worker with unexceptional views and an up-by-her-bootstraps biography (first in her family to earn a college degree, worked at McDonald’s to pay her way through school) that she can wield smoothly, as she did when she gave the GOP’s response to the State of the Union address in January. She has raised a tremendous amount of money without much visible effort and won’t really begin campaigning in the district until after the Aug. 5 multiparty primary, in which the top two candidates (regardless of party) advance to the November ballot. 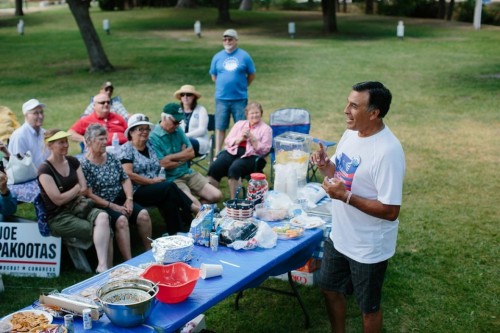 The only Democrat running (the other two candidates are a Tea Party Republican and an independent), Pakootas has still had to work very hard just to have a chance in the primary. Running as a Democrat in the 5th District is, as one organizer put it, “taking one for the party,” and the Democrats in Spokane had to convince Pakootas, the chief operating officer (CEO) of the Colville Tribal Federal Corp., which manages tribal business and brought in $86 million in gross revenue last year, that he should accept the challenge. The Native population can’t deliver many votes (there are just over 9,000 registered Colville members, the largest Native group in the district), but Democratic Party officials saw Pakootas’ potential to be a rare crossover figure.

Pakootas, 57, has an undeniably compelling story. Like his opponent, he comes from humble roots. McMorris Rodgers’ father owned an orchard in small-town Kettle Falls and had political aspirations of his own. Pakootas had a somewhat rougher road: he was born on the reservation and was a ward of the state by the time he was in the second grade. He and six of his seven siblings were sent to live with a foster family on a dairy farm off the reservation; it was three years before they were reunited with their parents. The only one of his siblings who didn’t grow up to be an alcoholic or drug addict was an older brother who died in a motorcycle accident as a teenager. Pakootas himself was a star athlete in high school, but he “went the path of drinking,” as he puts it, for a couple years. By the time he straightened out, his athletic career was derailed, and he was married, with a child on the way. 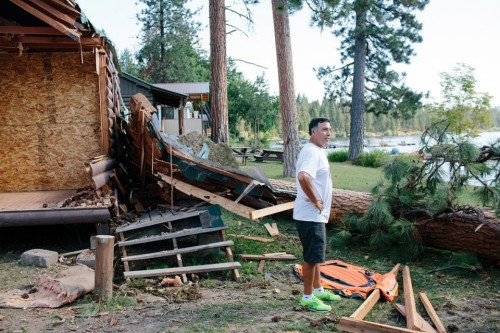 The candidate surveys damage at the Rainbow Beach Resort, one of the businesses he supervises as the CEO of the Colville Tribal Federal Corporation. Cabins at the resort, located on the Colville Indian Reservation, were destroyed by a storm with heavy winds.Ian C. Bates for Al Jazeera America

That he managed to become the man he is today — the Colville CEO who helped turn around tribal finances and helped lead a successful lawsuit against a Canadian mining firm that was polluting the Columbia River — is a testament to his character. For the first time in its history, the Colville Corp. is managed entirely by Native Americans, from Washington state and beyond. Pakootas has instituted a more Native-friendly culture for the employees, including things like extended leave for root-gathering season in the spring. He has also cut waste by shuttering unprofitable mills and houseboat concessions owned by the tribe, while focusing on profitable casinos and the next great hope for the tribe’s future growth: luring corporations by offering offshore-style tax concessions on the reservation. He credits his time in foster care with helping him be at ease with non-Native culture, and he worked his way up in industries — construction and later drilling and blasting — that were at times downright hostile to Native Americans. And he’s done all this while running a successful convenience store in his hometown of Inchelium. He’s been married for 38 years to his high school sweetheart; they have four children and six beautiful grandkids.

But having a great story isn’t the same as being able to tell it glibly on command. Over lunch at the gilded Davenport Hotel, in downtown Spokane, Pakootas is disarmingly thoughtful and honest. He’ll tell you about why he wears a Livestrong bracelet (for the friends and family he lost to cancer). He’ll explain that the End of the Trail pendant, based on the iconic James Earle Fraser sculpture of the plains Native American slumped in the saddle, is around his neck because it was his deceased brother’s favorite artwork: “[his death] is constantly with me,” he says. And if you ask about the aplastic anemia bracelet on his other arm, he’ll start to cry: he lost a 6-year-old niece to the disease.

That emotional honesty is not just his own personality, he says later; it is also Native culture. One of the human-resources reforms he instituted as CEO was to allow a more flexible bereavement schedule for employees. “Non-Indians can take an afternoon off for a funeral,” Pakootas says. “But we need a week, maybe two. We need time.” 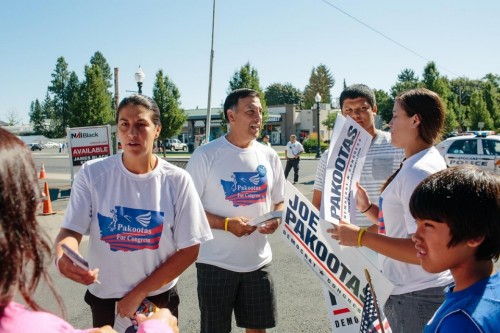 Pakootas and his family prepare to walk in the Perry Street Parade. Ian C. Bates for Al Jazeera America

Native culture is, in some ways, at odds with the two main chores of electioneering: self-promotion and fundraising. “That’s the worst part for me,” he says. “I never could talk about myself. I never could grovel for money, and I guess that’s kind of what we’re doing,” he says, laughing. When he ran for the tribal council, he did a lot of door-to-door politicking, which was fine, but “out here it’s all about money. And I’m not very good at it.”

Susan Brudnicki, an energetic former federal employee who is managing Pakootas’ campaign, has done everything short of locking him in a room with a phone and a call list for fundraising. Like his opponent, he has gone far outside the district for money. But he hasn’t had her success. “There are 566 tribes in the United States,” he says. “And I’ve called 80 percent of them.” He knows many of their leaders from as far back as the days when he played in rez-ball high-school-basketball tournaments all over the country. The Colville and Spokane tribes have given the maximum amount, but turning that farther-flung network into money has proved difficult.  “They say the same thing you hear from non-Indians,” he says. “They say it’s not a winnable race.” 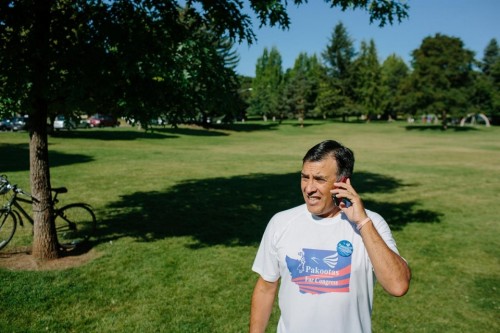 Taking a phone call after the Parade in Spokane. Ian C. Bates for Al Jazeera America

Native groups are active in politics in the gaming era, but more as tactical donors, not as boosters for Native candidates. That could explain, in part, why there are so few Native Americans running for federal office. Pakootas says he talked briefly with a Native congressional candidate in Minnesota who later dropped out of the race. There are two Republican legislators from Oklahoma with Native roots, but through the ages, the list of Native American politicians is woefully thin.

The end result is this: even with the money raised from Native American groups and tribes, Pakootas has raised less than $100,000. McMorris Rodgers has raised more than $2 million. That leaves retail politics. Brudnicki got Pakootas to start seeing a speech coach, to help him take the “ain’ts” and “innits” out of his sentences. But the nerves are harder to conquer; he carries around a moisturizing mouth spray — “my go-get-’em juice,” he jokes — for dry mouth, which plagues him when he speaks in public. 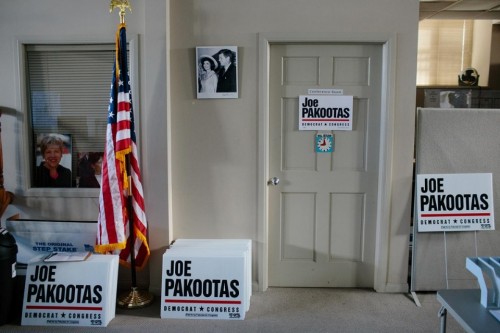 Outside of Pakootas’ office in Spokane. Ian C. Bates for Al Jazeera America

At a candidate forum hosted by the advocacy group in the Business and Professional Women’s Foundation in a school cafeteria in Republic, Washington, more than two hours northwest of Spokane, Pakootas is impeccably turned out in a blue suit with blue tie. Most of the other candidates and the hundred or so attendees are dressed in jeans and T-shirts and the like. Everyone in the room except Pakootas is Caucasian, from the two policemen wearing military-grade body armor to the nervous guy who asks the candidates who’s going to put a check on the environmentalists.

Pakootas certainly looks like a politician: smooth skin, strong jaw, and good hair. (One political consultant who normally advises against using candidate pictures on billboards had a change of heart upon meeting Pakootas face to face.) But his delivery still needs work. He starts answers strong enough, citing statistics about rising poverty in the district and defending the role of government in creating jobs. But he tends to flee at the end of his answers, to talk quickly and then sit quickly. 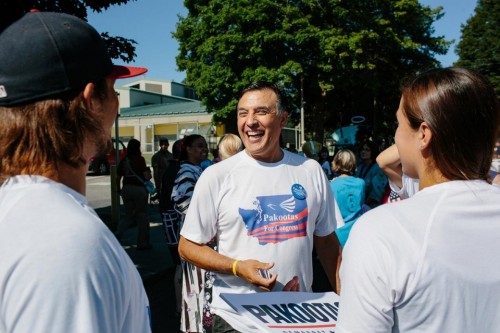 McMorris Rodgers isn’t there, but the other two opponents are, and they fare no better. Dave Wilson, a successful Spokane businessman running as an independent, promises to “end the gridlock” without coming close to articulating how. Tom Horne, a conservative Republican, follows that by huffing that gridlock in Washington is the whole point: “It keeps things from getting worse faster.” When the break comes, Pakootas retreats to the back of the room, near the table where the lemonade and brownies are being served, and makes small talk with Brudnicki and a few of his volunteers until it’s time to go.

The crowd is much smaller the next evening in Colville, the seat of Stevens County, an area that one resident calls a “biker-gang retirement community.” Colville is also ranching and logging country, and there’s a deeply Western conservatism here. Fewer than two dozen people have shown up for the Pakootas “town hall” at the pavilion in Yep Kanum Park, and the crowd looks somehow even smaller under the tall trees. But the Democrats who are here are true believers, both in progressivism and in this candidate. The owner of the local window shop thanks Pakootas for running. Walt Kloefkorn, the Washington state coordinator for Progressive Democrats of America, rattles off a list of Democratic candidates from prior elections, all unserious or underqualified in some way. “I think Joe’s one of the best Democratic candidates in years,” he says.

And it’s true: in the smaller crowd, much more receptive to his set menu of pro-choice, pro-environment policies, Pakootas is at ease. Speaking into a small mic attached to a portable amp Brudnicki brought, he tells jokes and gets laughs. He tells his own story with a bit more polish than the night before.

After the speech, the Rev. Jim CastroLang of the local United Church of Christ comes over and shakes Pakootas’ hand. He congratulates the candidate on staying upbeat, despite the odds. “You know how it goes,” he says. “You can’t win — until you do.” 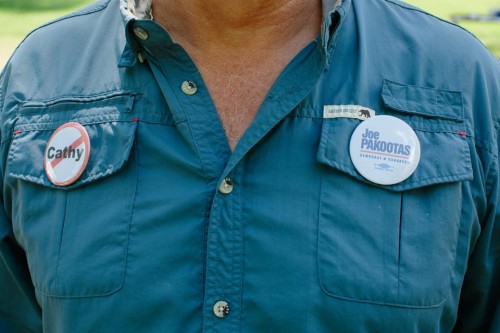 This series is produced in partnership with Roads & Kingdoms.