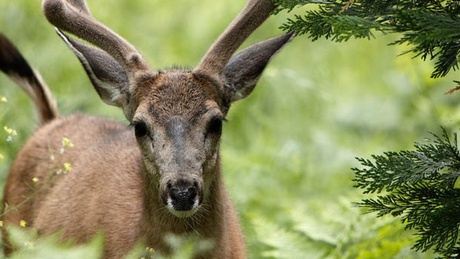 Wildfires have ravaged more than a million acres across the Northwest. In central Washington, the burned landscape will leave one of the state’s largest deer herds without a place to go this winter, when deer like to eat bitterbrush and chokecherry.

Those shrubs will be hard for deer to find this year – with 25,000 acres of habitat scorched by fire, including parts of five wildlife areas.

“We’ve dealt with winter range burns before, but we’ve never had to do it on this scale,” Fitkin said.

That means many fawns and some adult deer could starve this winter. Wildlife managers are going to issue more antlerless hunting permits, possibly for up to 20 percent of adult does.

Wildlife managers will also temporarily supplement some feeding areas. They hope this will help draw deer away from crops and orchards.

“We really don’t like to feed to try to prop up animal populations for any length of time,” he said. “We’d rather see the landscape recover and have the animals in tune with whatever the existing capacity for the landscape is.”

Concentrating a large number of deer can cause more diseases to pop up. It also makes deer more vulnerable to predation and poachers.

Fitkin said deer could face a lack of winter range for several years, as shrubs slowly grow back.

That wildlife area is also a winter range for mule deer. Officials say deer there have more places to go this winter because the fire is not as large as those in Washington.