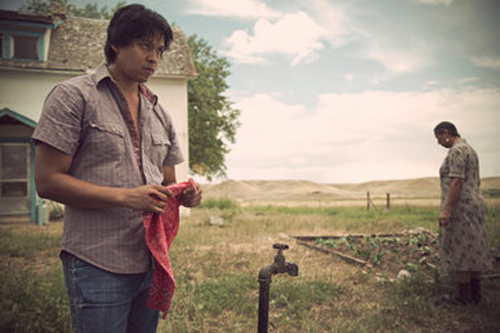 Chaske Spencer plays an alcoholic Blackfoot Indian man whose wife has run away in “Winter in the Blood,” set in Montana. Credit KBD Photography/Kino Lorber

‘Winter in the Blood,’ a Drama About Alcoholism

WINTER IN THE BLOOD

Like its broken antihero, an alcoholic Blackfoot Indian named Virgil First Raise (Chaske Spencer), “Winter in the Blood” lacks energy and volition. What it doesn’t lack is compassion, either for the wounds of childhood or the trap of ethnicity.

Filming in their home state, Montana, the brothers Alex Smith and Andrew Smith (adapting a 1974 novel by the Native American writer James Welch) sweat to translate Virgil’s existential pain into a visual narrative. Scenes dissolve and bleed into one another as he staggers between a small, arid town and the farmhouse he shares with his tart-tongued mother and his silent grandmother. Rarely without a flask or bottle at his lips (we first meet him passed out in a ditch), Virgil has a bloated, tipsy gait and a lost-boy look. He also has a runaway wife and a black hole where his identity should be.

Similar to the brothers’ previous feature, “The Slaughter Rule” (2002), “Winter” buckles beneath male conflict and heavy-handed metaphors. But the cinematographer, Paula Huidobro, captures the Montana plains and infinite skyline in wide, lyrical sweeps, while gauzy cross-fades parallel the ebb and flow of Virgil’s memories and hallucinations. Real and surreal weave together, and an impeccably chosen soundtrack — by, among others, the Heartless Bastards and Robert Plant — reinforces a mood that veers from dreamy to violent with shocking suddenness.

The journey from page to screen may have battered Mr. Welch’s novel, but its lamenting heart beats loud and clear.