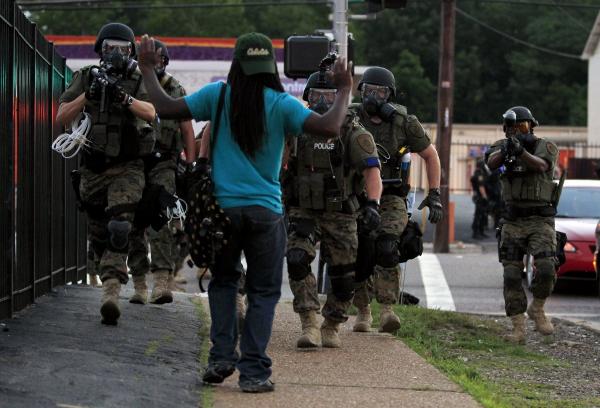 Brown, an 18-year-old black man, reportedly robbed a convenience store in the St. Louis suburb around noon on August 9. Thirteen minutes later, he was shot dead by a white police officer.

The incident, which rocketed to national attention with the help of social media, touched off days of vigils, riots and military police action in a town of about 21,000 people. It also sparked a federal investigation and brought to the surface complaints about racial profiling and police brutality.

Among protesters’ demands is creation of a federal commission to investigate trends of militarized police forces nationwide—and the civil unrest that follows. If formed, the federal commission would be the first in nearly half a century to address these issues.

“I think the time is long overdue for something like this,” said David Harris, a law professor at the University of Pittsburgh and the leading national authority on racial profiling. “There’s talk in the wake of Ferguson of reconstituting a commission that would look at police use of force, if not the entire criminal justice system.”

President Lyndon B. Johnson in 1967 established the 11-member National Advisory Commission on Civil Disorders to investigate the causes of race riots in Los Angeles, Detroit and Newark in the mid-60s. Also called the Kerner Commission, the group met for seven months and produced a report that suggested white America bore much of the responsibility for racial unrest.

The commission found that black frustration came from a sense of powerlessness, poverty and lack of opportunity. It called for the federal government to intervene and provide housing, education, employment and social services to black communities, and to dismantle discriminatory practices system-wide.

The commission’s most quoted conclusion was this: “Our nation is moving toward two societies, one black, one white—separate and unequal.” Johnson accepted the report in March of 1968, but ultimately did not support it.

“One of the things that the Kerner report said is that many of these disturbances began with police encounters with citizens—even traffic stops—that went awry and ended up with people dead,” he said. “It’s amazing how that thread moves through so much of the last six decades.”

U.S. Attorney General Eric Holder on Wednesday was in Ferguson promising a thorough investigation into the shooting. In a statement, Holder pointed to the bond of trust that should exist between law enforcement and the public, calling it “all-important” and “fragile.”

That trust has been historically absent in relationships between minority populations and police forces, Harris said, noting that it can be hard to find a black man anywhere in the U.S. who has not been a victim of racial profiling. Profiling—from both sides of the equation—happens long before an incident becomes violent, he said.

“In relations between African Americans and other minorities and police, you’re never writing on a blank slate,” he said. “There’s a history that goes all the way back to slave patrols, which were among the first sources of organized law enforcement.”

The U.S. Constitution, which reflected attitudes and beliefs of the time, defined slaves as “three-fifths of all other persons.” Those beliefs trickled through the generations and centuries and are still apparent in today’s conflicts, Harris said.

“The history of race relations and racism in this country pervades police institutions just as it does every other institution in the United States,” he said. At the same time, when a white police officer shoots a black person, “perceptions and memories and beliefs are already there for people to say this is another one of the worst examples of how police treat black people. It fits a long-existing, deeply held narrative.”

Conflicts like the one continuing in Ferguson have broad implications for all non-white populations, said David Patterson, assistant professor at Washington University’s Brown School of Social Work, located in St. Louis. Patterson, who is Cherokee, said it all boils down to identity and experience.

Protestors rally Sunday, August 10, 2014 to protest the shooting of Michael Brown, 18, by police in Ferguson, Missouri on Saturday, August 9. Brown died following a confrontation with police, according to St. Louis County Police Chief Jon Belmar, who spoke at a press conference Sunday. The protesters rallied in front of the police and fire departments in Ferguson following Belmar’s press conference. (AP Photo/Sid Hastings)

“Any human being who has experienced suffering, the default emotion is anger or rage,” Patterson said. “When you see images like men lying dead in the street, those emotions are easily brought on. To be non-white in certain communities, those images are burnt into our minds.”

Patterson pointed to historical conflicts like the 1864 massacre at Sand Creek, Colorado, or the American Indian Movement’s 1973 occupation of Wounded Knee—two confrontations where military action resulted in excessive violence. He believes the incidents illustrate a pervasive disconnect between military or police forces and minority populations.

“Using words like ‘they’ and ‘them’ allows us to be separate,” he said. “When you view a community or race as the ‘other,’ you don’t have to connect. You can view African Americans or Indians in a certain way and see them as less than human.”

The same section of the Constitution that defined slaves as three-fifths of a person excluded Natives entirely. Natives were not considered citizens at all until 1924.

As federal investigators review the Ferguson shooting, a separate probe continues in Albuquerque, where officers have been accused of a pattern of excessive force. That federal investigation was launched in March after Albuquerque officers shot and killed a homeless man who was camping in the Sandia foothills.

Patterson said he wants to see protests continue in Ferguson until meaningful work toward solutions begins, including more federal direction for police forces and resources for minorities.

“In some sense, this community is at its most powerful right now,” he said. “As long as folks keep marching and keep the cameras here, things can happen.”