PORT ANGELES, Wash. — The National Park Service is in the final phase of the largest dam removal in U.S. history, taking place on the Olympic Peninsula.

Just 30 feet of concrete dam stand between the Elwha River and its freedom.

And early next week, it’ll be gone.

A giant orange crane moves slowly overhead as Don LaFord looks down from a narrow walkway over the Elwha River.

LaFord, a contractor for the National Park Service, has overseen the dam removal project from the beginning in 2011. Two hundred feet below where he’s standing, the river rushes by, almost completely free. Almost. 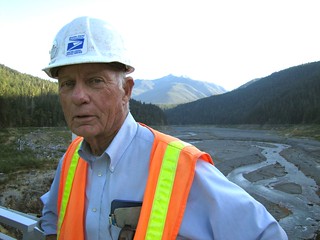 So far, a little more than half of the millions of tons of muck and debris that were lodged above this dam have been released, turning the river a chalky gray color as it empties into the Strait of Juan de Fuca, 13 miles from where we’re standing.

“I spent most of my career building power plants and this is the first one that I’ve been on where we’re demolishing hydroelectric plants,” LaFord said.

When the dams are gone he says he might retire.

Although the dam removal workers will soon be departing, fish and wildlife are doing no such thing. Salmon, otters and bald eagles are arriving upstream from where the dams blocked the flow of this river for more than 100 years.

The park service plans to have walkways installed so the public can see the former Glines Canyon and Lower Elwha dam sites in the next few months.

These two images show the difference in the Elwha River’s flow from July 10 to August 1. The remaining dam is circled in yellow in each image. Now that flows have dropped enough to expose the concrete, dam removal can begin again. Credit: National Park Service.