And Don’t Trip Over Custer 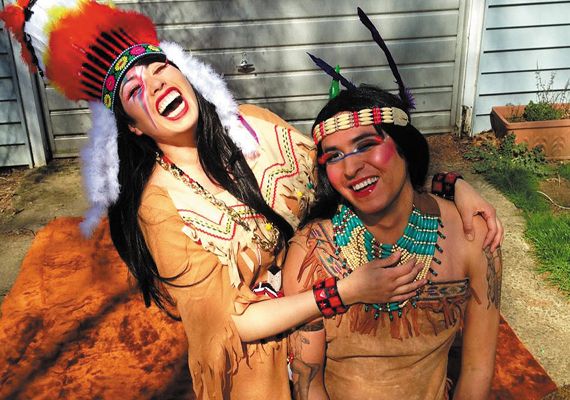 By Jen Graves, the Stranger

“This is our chance now, to show what we want to show, how we want to be represented,” she says in a phone conversation from Portland, where she lives. She grew up on the Crow reservation in Montana, the daughter of a proud Crow man and a proud Irish American nurse. The two met on the reservation, where Wendy grew up called a “half-breed” without any malice at all. Her sister, Chelsea, is Korean, born in Korea and dropped on the proverbial stoop of an orphanage, the story goes. While serving as a nurse in the US military in Korea, Wendy’s mother adopted Chelsea as an infant—years before the independent Irishwoman moved to the Crow reservation for another nursing job, and met Wendy’s father.

Chelsea became the last of the Crow speakers. She came home from preschool singing Crow songs and responding to her father in Crow; by the time Wendy was born, there was only English at preschool. Chelsea still dreams in Crow.

From that history, Red Star spins art that provokes, remembers, jokes, and reinterprets. The other 10 artists she’s chosen for Bumbershoot are her “dream team,” their work ranging from photography to video games to painting and beyond. There is no “Native style” here, none of the fixed aesthetic that often attends even contemporary group exhibitions by Native artists in museums and galleries. Da-ka-xeen Mehner, for instance, is showing 11 Years of Beards, which is literally his hair. It just happens to grow in half-blond and half-brown, due to a scar on his chin, and he happens to be Tlingit/N’ishga and white. Another artist, Skawennati, made a video game where futuristic characters can revisit historical moments, just not change them. A Mohawk warrior from the future can witness a massacring of Mohawks in the past.

Don’t trip over Custer. The foolish US Army commander who died along with all his men in the 1876 Battle of Little Bighorn will be lying dead on the gallery floor, in a life-size sculpture by Demian Diné Yazhi’. Playing on a wall will be Peter Morin’s video compilation, on endless repeat, of all the sequences of Pocahontas’s animated hair waving in the Disney wind in the Hollywood cartoon. John Feodorov made a giant warbonnet for the middle of the gallery. Another artist, Tanis S’eiltin, uses found photographs of her mother visiting the Seattle World’s Fair to stage a re-creation.

Red Star’s own career is on fire, but this is the very first time she’s shown in Seattle. In the last year, she’s had four solo museum exhibitions. Her work is part of a traveling group show now in Paris that next spring goes to the Metropolitan Museum of Art in New York. It’s a show that combines artifacts and new art. “When else do you get to collaborate with your ancestors?” Red Star says. The group show includes her celebrated Four Seasons series, a quartet of photographs in which she poses in majestic Crow regalia in the midst of fake nature: cheesy landscape paintings for backdrops, thrift-store objects for props, including a blow-up deer. The portraits are deadpan, contemplative.

She made those in 2006; now she’s tackling history directly. For a coming show at the Portland Art Museum, she’s commissioned custom stuffed animals based on drawings a Crow chief made in 1880. Medicine Crow was one of seven Crow chiefs essentially kidnapped in Washington, DC, until they signed over railroad rights on their land. While there, the US agents took them to the zoo, where they came across caged animals native to Crow country—and those are what Medicine Crow drew. The drawings, photographs, and stuffed animals will join a traditional Crow jacket from the museum’s collection that resembles one worn by the delegation.

For Saint Louis Art Museum, Red Star made Crow dresses bedecked with prestigious elk teeth. She finished them at the last minute and shipped them to the museum without getting to try them on. When she met the dresses in St. Louis, she told the curator she had to put one on. “The two museum installer guys were so mortified that they had to leave,” she says, cracking up. “When I did that, it felt like all the objects in there were having a good laugh, because they don’t get that treatment, they don’t get to see their community.”

For Bumbershoot, Red Star is restaging a famous photograph taken of John Lennon and Yoko Ono during their media-frenzied 1969 Bed-ins for Peace. Red Star and a friend replace the couple, but wearing warbonnet headdresses, while touting the message of peace. “I know we’re the only all-Native exhibition there,” Red Star said. “I guarantee we’re going to see some hipsters in headdresses.”