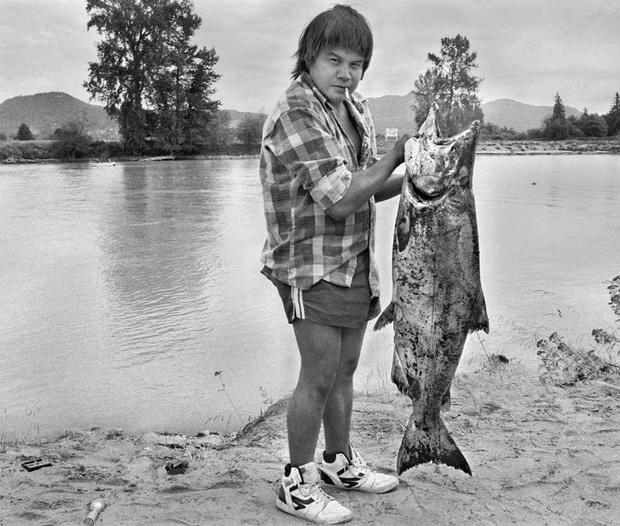 Scott Terrell photo
Tribal fisherman Randy Fornsby hoists a chinook salmon on the bank of the Skagit River west of Mount Vernon, Wash., Sept. 2, 1987. The Swinomish and Upper Skagit tribes shared a fishing area just upriver from where the Skagit breaks into its north and south forks.

LA CONNER, Wash. – With 95 percent of the Swinomish Indian Tribal Community’s reservation borders on the water, the tribe is concerned about the rise in sea level and storm surges expected as the planet warms.

As sea level rise pushes high tides and winter storm surges farther inland, coastal tribes in the Northwest worry that their archaeological sites will be wiped out, Swinomish Tribal historic preservation officer Larry Campbell said. They also worry that traditional food sources like salmon and oysters may be affected.

Campbell said food and medicine resources used by tribes around the country have moved or disappeared altogether in some places from where they were traditionally gathered, which is believed to be a result of the changing climate and shifting weather patterns. Those changes affect not only physical access to the natural resources, but the cultural well-being of the tribes.

“It’s important when you look at overall health to look at not just the foods and the resources, but the gathering,” Campbell said. “There’s a process of gathering these things that’s traditional in nature.”

Traditions are passed down through generations as elders share family gathering secrets with their next of kin, he said.

The Swinomish tribe has gained national recognition for its commitment to protecting the culture and natural resources of the Skagit Valley in the face of climate change and is gearing up to begin a new research project. Building off past studies, the tribe will evaluate both the physical and social impacts climate change may have on local near-shore environments.

Swinomish environmental health analyst Jamie Donatuto said the study will build upon earlier research by looking at indigenous health indicators, which take into account cultural, familial and emotional aspects of the impacts climate change may have on the natural resources the tribe values.

Over the course of the three-year study, Swinomish environmental specialist Sarah Grossman will lead efforts to monitor waves and winds on the shorelines during the winter, when storm surges roll in. She will also lead beach surveys to document characteristics like sediment, wood debris and eelgrass cover.

Donatuto will lead the social science side, organizing a series of spring workshops to invite the community to review and discuss the scientific data collected.

“You can’t assess health without actual conversations with community members,” she said.

A $756,000 U.S. Environmental Protection Agency Science to Achieve Results program grant was awarded in June to support the multiyear project.

Swinomish intergovernmental affairs liaison Debra Lekanof said the Swinomish have invested $17 million in collaborative work on the nation’s natural resources over the past 10 years.

“We’re protecting the universal resource rather than the tribal resource. We’re doing a lot more for the state and the county, and then in the end the tribe benefits by taking care of the whole,” Campbell said. “We’re a very aggressive tribe when it comes to our environment.”

The tribe has also been chosen as a finalist for the Harvard Project on American Indian Economic Development’s Honoring Nations Program. The program, run by the John F. Kennedy School of Government at Harvard University, “identifies, celebrates and shares excellence in American Indian tribal governance.” This year, the tribe gained its place among 18 finalists in the running for the single “High Honor” because of its climate change initiative. The winner will be announced in October.

The Swinomish Indian Senate passed a proclamation on its climate change initiative Oct. 2, 2007, that marked the start of the tribe’s commitment to addressing the potential effects of climate change. The tribe developed an Impact Assessment Technical Report in 2009 and a Climate Adaptation Plan in 2010 that have provided a framework for other tribes to follow, and has continued to conduct related research, Donatuto said. 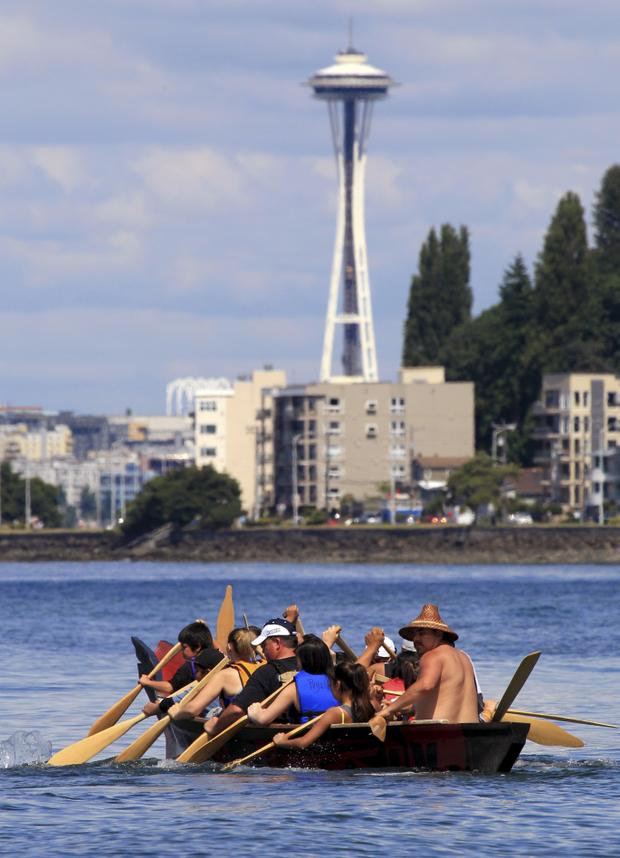 Associated Press photo
A tribal canoe, in view of the Space Needle, arrives July 20, 2011, at Seattle’s Alki Beach. The landing of about a dozen canoes marked one leg of an annual journey of tribal canoes from the Salish Sea, heading to Swinomish, Wash.