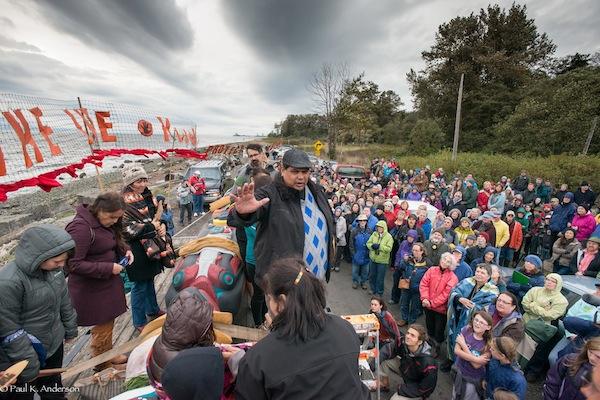 Courtesy of ‘Kwel Hoy: A Totem Pole Journey’
A 19-foot pole carved by Lummi master carver Jewell James and the House of Tears Carvers is being taken on a journey to 21 Native and non-Native communities in four Northwest states and British Columbia. James carved the pole to compel people to speak out against coal and oil transport projects that could have a devastating impact on the environment. The pole will be raised at Beaver Lake Cree First Nation on September 6.

LUMMI NATION, Washington—At each stop on the totem pole’s journey, people have gathered to pray, sing and take a stand.

They’ll take a stand in Kamloops, Calgary and Edmonton. And they’ll take a stand at Beaver Lake Cree First Nation, where the pole will be raised after its 5,100-mile journey to raise awareness of environmental threats posed by coal and oil extraction and rail transport.

“The coal trains, the tar sands, the destruction of Mother Earth—this totem [pole] is on a journey. It’s calling attention to these issues,” Linda Soriano, Lummi, told videographer Freddy Lane, Lummi, who is documenting the journey. “Generations yet unborn are being affected by the contaminants in our water.… We need people to take a stand. Warrior up—take a stand, speak up, get involved in these issues. We will not be silent.”

The 19-foot pole was crafted by Lummi master carver Jewell James and the House of Tears Carvers. The pole and entourage left the Lummi Nation on August 17 for 21 Native and non-Native communities in four Northwest states and British Columbia. The itinerary includes Olympia, the capital of Washington State, and Victoria, the capital of British Columbia. The pole is scheduled to arrive at Beaver Lake Cree on September 6.

The journey takes place as U.S. energy company Kinder Morgan plans to ship 400 tanker loads of heavy crude oil each year out of the Northwest; a refinery is proposed in Kitimat, British Columbia, where heavy crude oil from Enbridge’s Northern Gateway pipeline would be loaded onto tankers bound for Asia; and as Gateway Pacific proposes a coal train terminal at Cherry Point in Lummi Nation territory. Cherry Point is a sacred and environmentally sensitive area; early site preparation for the terminal was done without permits, and ancestral burials were desecrated.

In a guest column published on August 11 in the Bellingham Herald, James wrote that Native peoples have long seen and experienced environmental degradation and destruction of healthy ecosystems, with the result being the loss of traditional foods and medicines, at the expense of people’s health.

“We wonder how Salish Sea fisheries, already impacted by decades of pollution and global warming, will respond to the toxic runoff from the water used for coal piles stored on site,” he wrote. “What will happen to the region’s air quality as coal trains bring dust and increase diesel pollution? And of course, any coal burned overseas will come home to our state as mercury pollution in our fish, adding to the perils of climate change.”

James wrote that the totem pole “brings to mind our shared responsibility for the lands, the waters and the peoples who face environmental and cultural devastation from fossil fuel megaprojects.… Our commitment to place, to each other, unites us as one people, one voice to call out to others who understand that our shared responsibility is to leave a better, more bountiful world for those who follow.”

‘This Is the Risk That Is Being Taken’

Recent events contributed to the urgency of the totem pole journey’s message.

Two weeks before the journey got under way, a dike broke at a Quesnel, British Columbia, pond that held toxic byproducts left over from mining; an estimated 10 million cubic meters of wastewater and 4.5 million cubic meters of fine sand flowed into lakes and creeks upstream from the Fraser River, a total of four billion gallons of mining waste. A Sto:lo First Nation fisheries adviser told the Chilliwack Progress of reports of fish dying near the spill, either from toxins or asphyxiation from silt clogging their gills; and First Nation and non-Native fisheries are bracing for an impact on this year’s runs.

On July 24, a Burlington Northern train pulling 100 loads of Bakken crude oil derailed in Seattle’s Interbay neighborhood. The railcars didn’t leak, but the derailment prompted a statement from Fawn Sharp, president of the Quinault Indian Nation and the Affiliated Tribes of Northwest Indians and Area Vice President of the National Congress of American Indians.

“People need to know that every time an oil train travels by, this is the risk that is being taken,” she said. “These accidents have occurred before. They will occur again. … The rail and bridge infrastructure in this country is far too inadequate to service the vast expansion of oil traffic we are witnessing.”

A year earlier, on July 6, 2013, an unmanned train with 72 tank cars full of Bakken crude oil derailed in a small Quebec village, killing 47 people. An estimated 1.5 million gallons of oil spilled from ruptured tank cars and burned; according to the Washington Post, it was one of 10 significant derailments since 2008 in the United States and Canada in which oil spilled from ruptured cars.

Some good news during the journey: As the totem pole and entourage arrived at the Yankton Sioux Reservation in Wagner, South Dakota, word was received that the Oregon Department of State Lands rejected Ambre Energy’s application to build a coal terminal on the Columbia River; the company wants to ship 8.8 million tons of coal annually to Asia through the terminal.

One of the concerns that communities have about coal transport is exposure to coal dust; those concerns are shared by residents of Plaquemines Parish, Louisiana, where proponents of a coal terminal on the Mississippi River forecast an increase in Gulf Coast coal exports from seven million tons in 2011 to 96 million by 2030.

“I think the risk is real. I think there is a lot of potential harm from multiple sources,” Maumus told the Times-Picayune.

James said there are alternatives to coal and oil—among them energy generated by wind, sun and tides.

“But we’re not going to move toward those until we move away from fossil fuels,” he said.

In his Nation’s territory, Yakama Chairman JoDe L. Goudy told videographer Lane he hopes the pole’s journey will help the voice of Native people “and the voice of those people across the land that have a concern for the well-being of all” to be heard.

“May the journey, the blessing, the collective prayers that’s [being offered] and the awareness that’s being created lift us all up,” he said, “lift us all up to find a way to come against the powers that be … whether it be coal, whether it be oil or whatever it may be.”

Albert Redstar, Nez Perce, advised young people: “Remember the teachings of your people. Remember that there’s another way to look at the world rather than the corporate [way]. It’s time to say no to all that. It’s time to accept the old values and take them as your truths as well.… They’re ready for you to awaken into your own heart today.”

To Unite and Protect

The totem pole journey is being made in honor of the life of environmental leader and treaty rights activist Billy Frank Jr., Nisqually. Frank, chairman of the Northwest Indian Fisheries Commission, walked on in May.

James said the pole depicts a woman representing Mother Earth, lifting a child up; four warriors, representing protectors of the environment; and a snake, representing the power of the Earth. The pole journey has been undertaken in times of crisis several times this century.

In 2002, 2003 and 2004, to help promote healing after the 9/11 terrorist attacks, James and the House of Tears Carvers journeyed across the United States with healing poles for Arrow Park, New York, 52 miles north of Ground Zero; Shanksville, Pennsylvania, where the hijacked United Airlines Flight 93 crashed; and Washington, D.C.’s Congressional Cemetery, seven miles from the Pentagon. And In 2011, James and a 20-foot healing pole for the National Library of Medicine visited nine Native American reservations en route to Bethesda, Maryland. At each stop on the three-week cross-country journey, people prayed, James said at the time, “for the protection of our children, our communities and our elders, and generally helping us move along with the idea that we all need to unite and protect the knowledge that we have, and respect each other.”