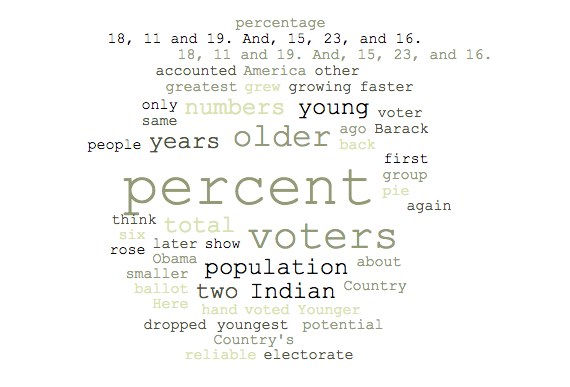 So what if you had more votes than everyone else? What if your vote counted more? Would you?

Well, on Tuesday the primary season ends with elections in the Northeast. And in one of those states — New York — a candidate for governor, is illustrating exactly that extra voting power. It’s what could happen with Native American voters in 2014.

Zephyr Teachout is running a rag-tag campaign against the machine of incumbent Gov. Andrew Cuomo. She insists that she’s going to win. On Saturday she told MSNBC’s Steve Kornacki that her route to victory will be the “miniscule” turnout in the primary. She said she will win the primary with 300,000 to 350,000 votes. In the last general election, Cuomo earned nearly 3 million votes.

Think of that: A primary vote is worth roughly 10 times that of a general election ballot. It’s because turnout is so low.

Low-turnout elections, whether primary or the general, favor the few, the organized, and, perhaps, Native voters.

How can that be? Let’s play with some numbers.

We know that New Mexico has the highest registration rate for Native American voters at 77 percent. That’s step one. And what if that were the standard? What if three-quarters of all eligible American Indians and Alaska Natives were registered to vote?

In Alaska, for example, the total registration for white voters is 71.1 percent, or roughly 362,000 people (figures from the Voter Elections Project and National Commission on Voting Rights.) Alaska Natives could be at least 17.1 percent of that or 87,210 votes. But current estimates are far below that — as low as 43,605.

So if we use New Mexico as the standard? Then the potential vote of Alaska Natives increases by at least 67,238, a difference of nearly 24,000 registered voters.

In a low turnout election, as 2014 is likely to be, that’s a pool of voters that every candidate would want to woo. (Remember it only took some 36,000 votes to knock off the next Speaker of the House, Rep. Cantor.)

Of course that’s just registration numbers. Step one. But the deadline for that first step is coming up across the country. Most states require registration 30 days before Election Day.

One phrase I’ve used a lot in this piece is “at least.” Let me explain. All of the numbers I am using are not precise and they’re based on elections past. But every year there is a growing number of first-time voters.

Indian country has the youngest population in America. Our percentage of potential young voters is growing faster than the population.

There are already success stories to shout out. In New Mexico and Montana, young Native American men, between 18 and 24, are registered at the highest rate of all Native American voters (just shy of 9-out-of-10.)

The whole premise of registering Native Americans to vote is simple, so that we can have a fair say in how this country is run and to better shape programs from health to education that determine our future.

A fair say? Pfffft. For Indian country the election of 2014 is about having a disproportionate say. Our votes will count more this time around. So will we?

Mark Trahant holds the Atwood Chair at the University of Alaska Anchorage. He is an independent journalist and a member of The Shoshone-Bannock Tribes. For up-to-the-minute posts, download the free Trahant Reports app for your smart phone or tablet.