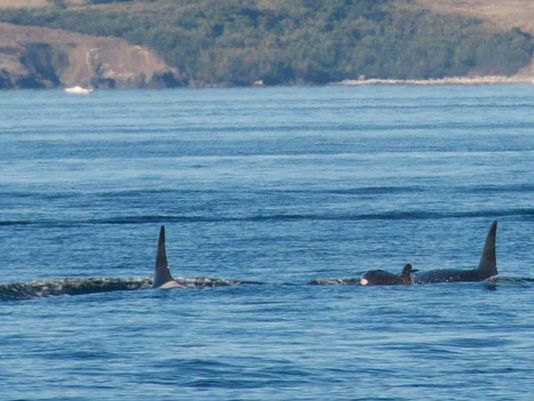 The Center for Whale Research is celebrating the birth of an orca calf in the Salish Sea, the first one since 2012.

The proud mother is 23-year-old L86, and this is her second calf. The newborn has been designated L120.

The birth is sorely needed in the Southern Resident Community population, Michael Harris, Executive Director of the PWWA, said in a press release. Their numbers had just dipped to 78, the lowest count in over a decade.

Meanwhile, the Northern Resident Community of British Columbia have steadily increased in numbers, and transient or marine mammal-eating orcas seem to be thriving in the Sound and Straits.

Yet the Southerns continue to struggle to recover, Harris said. Researchers attribute the problem to lack of prey, primarily their preferred diet of wild Chinook salmon.

A Pacific Whale Watch Association crew was the first to snap and post the baby photos.

“We wouldn’t have known about it, but heard from David Elifritt out on the water that L86 had a new calf, and then ran into them,” said Capt. Jim Maya of Maya’s Westside Whale Charters on San Juan Island. “What a thrill to be there at the right time in the right place. Everyone on board was so excited. I’ve never seen a calf born, but it’s always a thrill to be there the day a new calf was discovered.”

“I remember someone saw a shot of L86 breaching back in June and word got out that she had a little ‘baby bump,'” explains Michael Harris, Executive Director of the PWWA. “This is great news. But every time a baby’s born, we’re careful not to pass out the cigars too soon. Infant mortality is really high among wild orcas, especially these Southern Residents. This little whale has a tough road ahead. Every birth is exciting, but we’ll be especially thrilled and relieved to see L120 rolling back into the Sound and Straits next summer.”