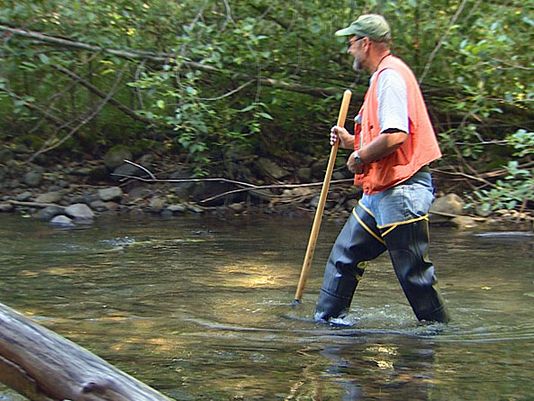 NEAR ENUMCLAW, Wash. — Tribal Biologist Justin Paul said a program that uses radio transmitters is designed to help slow down the number of salmon dying. The salmon in question were captured at a dam near Buckley then trucked around the dam and released upriver.

Paul said a number of factors could cause the deaths, including predators like otters and bears, injuries suffered during capture or the stress of being loaded into tanks and trucked around the dam.

When they are captured at the dam, workers insert radio transmitters into wild, female chinook. The tiny wires put off a strong enough signal to be picked up by a hand-held receiver. Paul walks up and down the river until he gets a ‘hit’ then follows it to the fish.

By locating the salmon, they can get an idea of problem areas in the river system and places where salmon need more protection or more access.