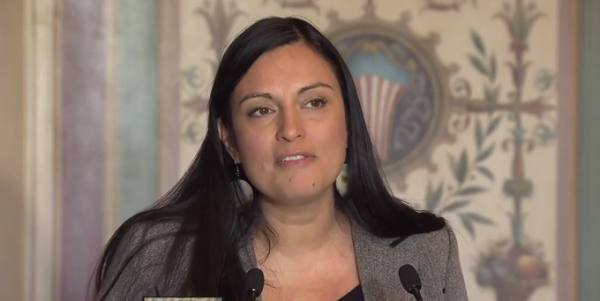 Tulalip Tribal Board Member Deborah Parker speaking in support of the Violence Against Women Act in 2012. Reason number six to vote.

Why vote? It takes planning, some time, and the rewards are not always visible. The same problems will surround American Indians and Alaska Natives before and after the election.

It’s easy to be trite and type, “this election matters more than most” and then cite specifics to make that case. But it’s not true. Win or lose (no matter who we support) life will go on.

But there are reasons to vote. Examples big and small that show how we can make a difference. Here we go.

I would add voting to that list. There’s a great example going on right now: the Independence vote in Scotland. Every Scot citizen, 16-years and older, will have a say about their future country. But that voice is only possible now because of Scotland’s participation in the United Kingdom’s electoral process. The idea of returning power had to be ratified in Parliament, a proposition demanded and promoted by the elected representatives from Scotland. Other countries have gone to war over independence. But Scotland is voting. The ultimate use of sovereignty.

Two. Because too many folks don’t want you to vote. Across too many government officials are taking steps to make casting a ballot harder, limiting early voting options, alternative polling spots, or failing to account for Native languages. Across the country there are lawsuits seeking resolution.

But in addition the smartest act of defiance is to vote. Every vote is reprimand of the philosophy to limit access. One of the worst examples of that notion surfaced last week when a Georgia state senator said he preferred “educated voters” to any increase in voters.

Three. Because climate change is real and any candidate who says it’s not, should be ruled out as a leader. The science is clear 97 percent of all peer-reviewed papers say the same thing: Global warming is real and humans are the cause. (This graphic from NASA is one way to see it for yourself.)

Why does this matter? Because our political leaders are going to have to make tough choices in the years and decades ahead on issues. Indian country is already being impacted and that will only get worse as communities will need significant new resources for mitigation or even relocation. If you vote for your children, this might be the most important single reason.

And the alternative from critics? There is not one.

Five. Because the Violence Against Women Act represents how politics can serve the greater good. So roll back the clock to a time when there were not enough votes in the U.S. Senate to pass the Violence Against Women Act with the provisions to give tribes additional authority. Then on April 25, 2012, at a news conference on Capitol Hill, Then Tulalip Tribal Vice Chairman Deborah Parker told her powerful personal story about abuse. Her story carried on YouTube and across the nation via social media as well as legacy media changed everything. The Senate passed the measure. Then the House leadership supported an extraordinary deal. According to Talking Points Memo: “The Rules Committee instead sent the House GOP’s version of the Violence Against Women Act to the floor with a key caveat: if that legislation fails, then the Senate-passed version will get an up-or-down vote.”

That made it possible for Congress (and the president to sign into law) the renewal of the Violence Against Women Act.

Six. Because friends matter. Even when the disagree. Most of the time, anyway. The Violence Against Women Act is a good example of why friends matter. Oklahoma’s Tom Cole was able to convince Republican leadership about the importance of the act. This law would not have happened without him. Cole, and Idaho’s Rep. Mike Simpson, have been important voices within the Republican caucus on matters ranging from VAWA to limiting the damage from sharp budget cuts.

And that brings me to seven …

Seven. Because there should never, ever be another Alaska Exception. If the Violence Against Women Act represents the best in politics, the Alaska Exception is the opposite. Alaska has epidemic levels of sexual violence and rape. So what does Congress do? It takes away a tool that tribal communities might be able to use to turn the situation around.

What’s worse is that the exception was inserted into the bill by Alaska Republican Sen. Lisa Murkowski who owes her election to Alaska Native voters and corporate spending. (I know this undermines Reason Six.) The Washington Post said last month: “Now, after pressure from Alaska Natives, Murkowski is reversing her position and trying to repeal the provision she inserted.” There are no heroes in Congress on this provision, including Alaska Sen. Mark Begich, a Democrat, who also supported the exception. He, too, has reversed himself.

The promise unfulfilled is that Congress would revisit this issue. That has yet to happen. But this whole episode should be a warning; a never again moment.

Eight. Because Congress must pass a Carcieri fix. The Supreme Court ruled in 2009 that limits what land the Department of Interior can take into trust. This has significant impact on tribal economic development. Montana’s Sen. Jon Tester, chairman of the Indian affairs committee, told Indian Country Today Media Network that while he believes in a clean fix, “many of my colleagues in the Senate don’t agree.”

The way to change that is pressure from voters.

Nine. Because your vote counts more than the gadzillions spent by those with money. Turn on a television and you see that money at work, ad after ad, dark images, somber music, and words about the evils of certain candidates. Politics should be about ideas and policies more than personality. What do we want out of government? How do we pay for that? Those are the big questions. The best way to do that is to ignore the campaigns and just vote.

Ten. Because women matter. More than half the population of the country is female yet representation is only about one-fifth in the Senate and even less than that in the House. As The Washington Post reported this week: “The Congress has always been and continues to be the domain of white men.” I think of the words of the late Wilma Mankiller. She said Cherokee treaty negotiators asked the United States team, “Where are your women?” Cherokee women often accompanied leaders at negotiations and so it was inconceivable that the federal government would come alone. There must be balance if we want to become the democracy that we can be.

Finally, in the spirit of Spinal Tap, let’s turn this vote meter to Eleven. Why eleven? Because it’s not ten. Where can you go from there? Eleven. One louder.

So reason number eleven. Because we can win. I started this post by mentioning the election coming up in Scotland. Some 4.2 million citizens signed up to vote, a 97 percent registration. Imagine what would happen if American Indians and Alaska Natives voted with those kind of numbers. It would upend politics in from Alaska to Wyoming. Local leaders would be replaced and we would have a far greater say in programs and policies. Already there’s evidence that the Native vote make a difference, but that influence should be growing. We have a younger population and in a low turnout election, we could call the shots. We could be one louder.

Mark Trahant holds the Atwood Chair at the University of Alaska Anchorage. He is an independent journalist and a member of The Shoshone-Bannock Tribes. For up-to-the-minute posts, download the free Trahant Reports app for your smart phone or tablet.