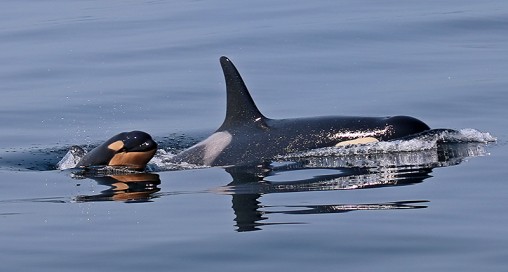 A calf born this year to a resident Puget Sound orca has not been seen recently and scientists think it may have died. | rollover image for more

Orca enthusiasts rejoiced when a newborn calf was spotted 7 weeks ago.

But as of Tuesday morning, the endangered killer whale calf has not been seen.

L120 was the first calf born in the past 2 years. The calf’s mother was spotted three times since Friday. Her baby was nowhere to be seen.

Orca experts believe the calf is dead, though no carcass has been found and it’s unclear how it died.

Orcas in Puget Sound are known to have high levels of toxic agents in their bodies. The pollution can be transferred from mothers to their offspring during gestation and while nursing.

Lack of food is another potential cause of death. Southern Resident killer whales rely on chinook salmon, which are also endangered.

There are now just 78 resident orcas left. That’s about how many there were back in 2005 when the animals were first put on the endangered species list.