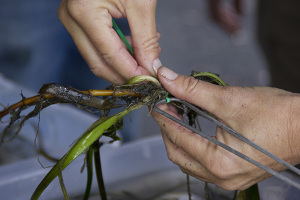 An eelgrass transplant consists of tying five eelgrass rhizomes together with a twist-tie and attaching it to a landscaping staple. The staple is then buried in the subtidal area where eelgrass is expected to flourish. More photos can be viewed by clicking on the photo.

Work will begin this week on the final phase of a major eelgrass restoration project located just outside Eagle Harbor on Bainbridge Island.

The project is at the site of the former Milwaukee Dock, near Pritchard Park. The dock, removed in the early 1990s, historically served the Wyckoff creosote plant; the area is now a Superfund cleanup site.

The dock was constructed in a dense subtidal meadow of eelgrass, which was further impacted by navigation channels that left two large depressions too deep for eelgrass to grow and flourish.

Eelgrass is recognized as one of the most valuable ecosystem components in Puget Sound. This project will contribute to the Puget Sound Partnership’s goal of increasing the amount of eelgrass habitat by 20 percent over the current baseline by 2020.

“The importance of eelgrass meadows to salmon and other fish and invertebrates is well documented,” said Tom Ostrom, salmon recovery coordinator for the Suquamish Tribe. “The depth of these depressions is what has prevented eelgrass from growing. Because the surrounding eelgrass is so dense and so robust, it makes this site a prime candidate for restoration.”

The Elliott Bay Trustee Council, which includes the tribe, began restoring the smaller of the two depressions in 2012; work begins this week on the larger depression. The work is being coordinated by the National Oceanic and Atmospheric Administration (NOAA).

The work takes place in three stages: The existing eelgrass is temporarily transplanted from the edges of the depression to nearby areas. The depression then is filled with clean sediment. After the sediment settles, the eelgrass is re-planted in the filled depression and is expected to fill out the former bare area.

SCUBA divers from the Pacific Northwest National Laboratory in Sequim (PNNL) have transplanted eelgrass back into the smaller depression and begun removing eelgrass from the larger depression in preparation for filling.

PNNL scientists will monitor the restoration site annually for at least five years to document how well the transplanted eelgrass is growing and to assess the overall success of the project.

The first phase of the project, restoring the smaller depression, was funded by the Elliott Bay Trustee Council from funds set aside for restoration efforts under a legal settlement with Pacific Sound Resources. The settlement addressed natural resource damages resulting from the contamination at two Superfund sites in Puget Sound, including the Wyckoff facility in Eagle Harbor.

Most of the funding for restoration of the larger depression is from a $1.76M grant awarded to the Suquamish Tribe from the Puget Sound Partnership through the Puget Sound Acquisition and Restoration Fund, a state

The U.S. Army Corps of Engineers will manage filling the larger depression.

More information about the Puget Sound Acquisition and Restoration program

The Puget Sound Acquisition and Restoration (PSAR) program was created in 2007 to help implement the most important habitat protection and restoration priorities. Funding is appropriated by the Legislature through the Salmon Recovery Funding Board, based on a request from the Puget Sound Partnership (PSP). PSP works with local entities to identify and prioritize the highest impact, locally-vetted, and scientifically-rigorous projects across Puget Sound. This funding is critical to advancing the most effective projects throughout our region.