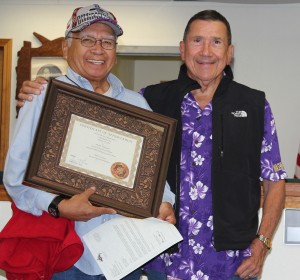 TULALIP – Tulalip elders over the past six years have worked diligently to make a positive change in their community through volunteer work via the Tulalip Elder’s Panel, an alternative diversion sentencing program at the Tulalip Tribes Tribal Court for first- time offenders.

On October 17, the panel of volunteers were celebrated by the Tulalip Tribes Tribal Court for their efforts in the community. The special recognition ceremony included Tulalip Tribes council members Deborah Parker, Maria Zackuse and Theresa Sheldon, along with over 30 attendees.

Enrollment is voluntary and upon successful completion of the program, charges are dismissed. However, the program does not come without its stipulations. Participants are required to complete a host of requirements to successfully complete the program. Requirements include active engagement in their culture and community, regular appearances before the panel, letters of apology, community service and substance abuse treatment, curfews, UA’s, anger management and mental health evaluations and no new violations.

Due to the success of the program, the Tulalip Elder’s Panel received the Hero’s Award in 2009 from the Washington State Bar Association for their volunteer service. This prestigious award typically goes to lawyers but in special circumstances, has been awarded to non-lawyers for their service in the field of law. The program has also inspired state courts to consider implementing a diversion program using the Elder’s Panel as a model. In 2011, the National Center for State Courts visited from New York to learn more about the panel.

“There is serious interest in the panel and the work the elders do,” said Wendy Church, Tulalip Tribes Tribal Court Director, during the recognition ceremony. “Not only do they save the Tribes a lot of funds in diverting young tribal members our of the criminal justice system, but the Elder’s Panel also has a high success rate of clients not returning to the system.”

The panel, in 2013, saved the court $20,000 in judicial and probation time, including jail cost, which can run the Tribe more than $100 a day for incarcerated tribal members. The panel sees an 87 percent success rate in participants.

Along with current panel members, former tribal court clerk Alicia Horne was honored for her work, along with Tulalip Tribal Court Judge Gary Bass and Don Hatch Jr., in establishing the panel. Horne is credited for creating the court forms the panel still uses. Former panel members Virginia Carpenter and the late Bill Shelton were also honored for their time and devotion to the Tulalip community.