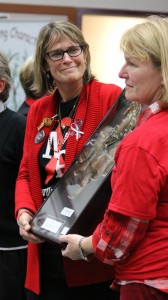 MARYSVILLE – Following a tradition set by survivors of the Columbine High School shooting, the Marysville School District and Tulalip Tribes were presented a dreamcatcher symbolizing survival, on November 3.

During a modified school district board meeting, representatives from Sandy Hook Elementary and delegates from the Red Lake Nation in Minnesota gave the dreamcatcher and shared their story of healing.

The dreamcatcher was gifted to Columbine High School in Littleton, Colorado, following a shooting that left 13 people dead in 1999. It has since been passed onto other school districts that have experienced similar tragedies and evolved into emblem of healing for survivors.

John Oakgrove of the Little Thunderbirds Drum and Dance Troupe from Red Lake Minnesota made the trek from Red Lake as a sign of unity. Survivors of Columbine took the dreamcatcher to the Red Lake Reservation following a school shooting there in 2005 that left 10 people dead, including the 16-year-old shooter. Oakgrove has travelled to present the dreamcatcher since, taking along his children who sing honor songs for survivors as part of the healing process. He was there when the dreamcatcher was presented to Sandy Hook Elementary School officials in 2012 following the deaths 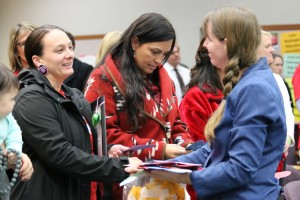 Tulalip Tribes council members Theresa Sheldon and Deborah Parker receive hand written notes from Stephanie Hope Smith from the Newtown Rotary Club, Monday, Nov. 3, 2014, at the Marysville School District Administrative offices. The notes were made by well wishers and given to the Sandy Hook Elementary School following the deaths of 26 children and adults from a 2012 shooting. (Tulalip News Photo/ Brandi N. Montreuil)

of 26 children and adults.

“I hate meeting people like this, but we came because we want to offer our support. We know what they are going through,” said Oakgrove.

“This plaque is more than just a dreamcatcher. It is made with such love. It is our hope that you should never have to pass it onto another community,” said Connelly. 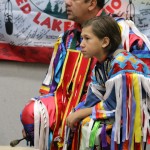 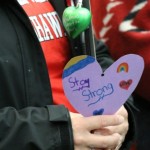 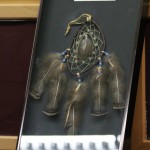 Dreamcatcher made for the survivors of the Columbine High School shooting in 1999 was presented to the Marysville -Pilchuck High School and Tulalip Tribes, Monday, Nov. 3, 2014, at the Marysville School District Administrative offices. The dreamcatcher has been passed to schools who have had shootings. (Tulalip News Photo/ Brandi N. Montreuil)