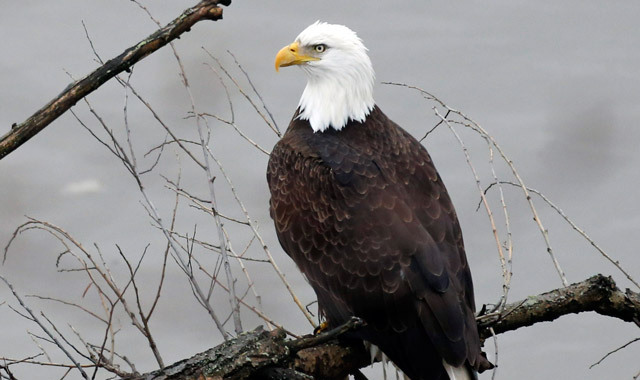 The significance of the exposure of the Pacific Northwest eagles to PBDEs is not clear, but PCBs were banned 40 years ago and we’re still dealing with the residual affect of that toxic chemical compound in the environment. (AP Photo/File)

A chemical flame retardant, banned in certain products in Washington state, is showing up in the environment, years later, in alarming levels.

Scientists studied the livers of 21 bald and golden eagles collected from Washington and Idaho and found polybrominated diphenyl ethers, known as PBDEs. Higher levels of the toxic compound were found in samples of eagles from urban areas. The compound has been commonly used as a flame retardant in all manner of consumer products, but it was banned in Washington in 2008.

“So PBDEs are not allowed to be used in Washington in the biggest uses, so furniture, TVs, computers, mattresses, that sort of thing,” explained Washington State Department of Ecology toxicologist Carol Kraege.

Over time, the compound breaks down.

“It gets in house dust, it gets in the air, it attaches to particles, things like dust, and then when you clean and wash, you rinse it all down the drain. It goes out into the water, gets in the fish,” said Kraege.

Another problem with PBDEs is that it’s bio-cumulative. In other words, creatures absorb it faster than it dissipates, with higher concentrations as you move up the food chain.

“You’ll find a little less in critters that live on the bottom of the Puget Sound and the top predator, like the eagle, will have the most,” according to Kraege. “For humans, we are at the top of our food chain, so it can be a problem for people. It has been detected in people, that’s part of what led to the ban was that it was detected in people and in high enough levels to start causing concern.”

PBDEs have been shown to reduce fertility in humans as well as other issues.

“The kinds of things that PBDEs can cause in people; learning disabilities, so if you’re exposed in utero or as a really tiny baby, it’s going to affect how your brain develops,” said Kraege.

The significance of the exposure of the Pacific Northwest eagles to PBDEs is not clear, but PCBs were banned 40 years ago and we’re still dealing with the residual affect of that toxic chemical compound in the environment.