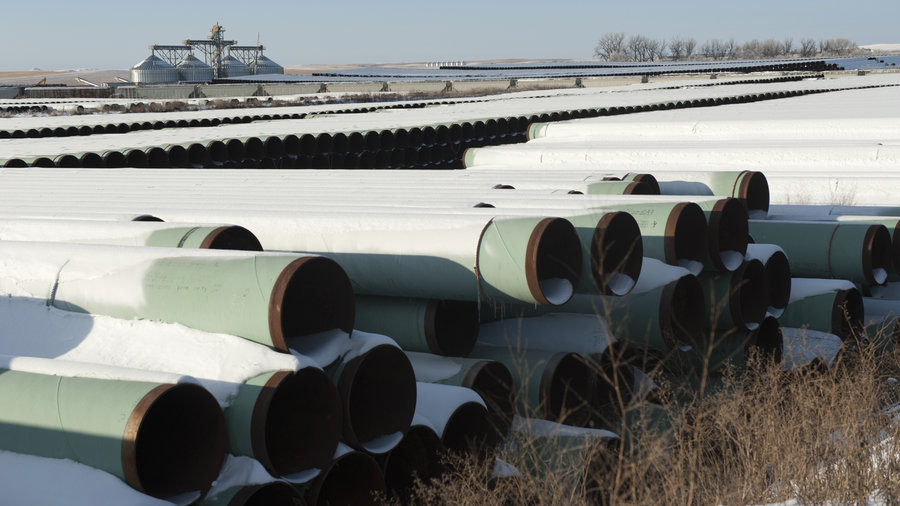 Pipes for Transcanada Corp.’s planned Keystone XL oil pipeline are stacked at a depot in Gascoyne, N.D. The House of Representatives approved the Keystone XL pipeline Friday; the Senate voted against it on Tuesday.

The controversial Keystone XL pipeline project to expand an oil pipeline running from Canada to the Gulf of Mexico has failed the approval of Congress, after the Senate voted against the project Tuesday. The House passed its version of the bill Friday.

An early tally showed 35 for and 30 against the bill; subsequent calls for senators’ votes failed to net the 60 votes needed for passage. The decisive 41st “No” vote came with 55 votes in favor, and the final tally was 59-41.

The vote came after President Obama stopped short of saying he would veto the bill, but he encouraged Congress not to take action before a long-awaited State Department review of the project is fully complete.

The two chambers of Congress moved to vote on the measure shortly after this month’s midterm elections, which left a Senate seat in Louisiana up for grabs in a runoff election between Sen. Mary Landrieu, a Democrat, and Rep. Bill Cassidy, a Republican. That vote is slated for Dec. 6, as we reported last week.

Several Democrats spoke against the Keystone extension during a floor debate before this afternoon’s vote.

“We’re going to see higher gas prices because of this,” said Democratic Sen. Barbara Boxer, the chairwoman of the Environment and Public Works Committee, predicting that oil from the Keystone project would be exported instead of being used to supply American markets.

Republican Sen. John Hoeven disagreed, saying that his state of North Dakota would benefit from the pipeline, using it to help move its oil that currently relies heavily on a congested rail system.

Landrieu responded to Hoeven by thanking him for his leadership and work on the bill. She went on to tell her colleagues, “This is for Americans, for American jobs, to build a middle class.”

We’ll note that a researcher who has studied the bill told NPR’s S.V. Dáte that of the jobs the project might create, none will be in Louisiana.

“I don’t think it goes through that state,” said Cornell University’s Sean Sweeney, who co-authored a 2012 report scrutinizing the project. “This is less about jobs numbers than it is about advancing the fossil fuel industry’s agenda.”

As we’ve reported, the Keystone issue has been contentious:

“Energy company TransCanada’s Keystone XL pipeline would carry tar sands oil from Canada to Texas; it has been a polarizing issue, pitting those who say it would create thousands of jobs against environmentalists who say tar sands oil is too expensive and toxic to refine. Where one side says the plan would bolster the energy industry, the other says it would increase greenhouse gases.”

Earlier today, NPR’s Scott Horsley and Jeff Brady laid out “What You Need To Know About The Keystone XL Oil Pipeline.”

As they explained, part of the pipeline is already in place:

“About 40 percent of the total project has been built so far, in two segments: a 298-mile stretchfrom Steele City, Neb., to Cushing, Okla., and a 485-mile segment between Cushing and Nederland, Texas. Oil is flowing through these pipelines from the increased production currently happening in the middle of the U.S.”

Senate Bill 2280 would authorize “TransCanada Keystone Pipeline, L.P. to construct, connect, operate, and maintain the pipeline and cross-border facilities specified in an application filed by TransCanada Corporation to the Department of State on May 4, 2012,” according to the bill’s summary on the congressional website.