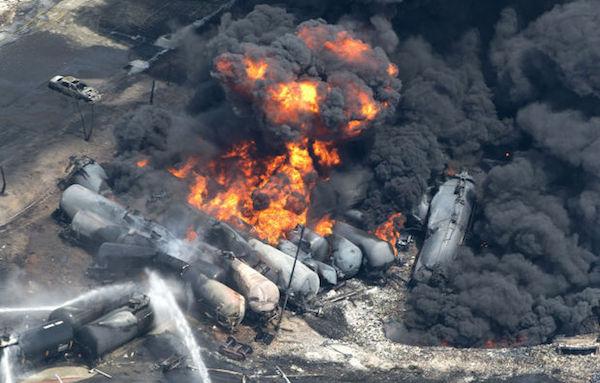 Associated Press
This derailment and explosion of a train carrying Bakken crude in Lac-Mégantic, Quebec, Canada in July 2013, killed 47 people. Northwest tribes and the State of Washington say, ‘No thanks.’

Washington State’s rail system is aging, and that combined with the flammability of Bakken crude oil spell danger for ecosystems and people, a top official and 10 tribes said in a Seattle Time sop-ed on November 20.

The Quinault have spoken out numerous times against such rail transport, a practice with potentially tragic consequences as evidenced by the July 2013 explosion in Lac Megantic Quebec, that killed at least 47 people.

The Quinault as well as Washington State Commissioner of Public Lands Peter Goldmark, issued a joint statement in conjunction with the op-ed piece. Tribes, Goldmark noted, are rightfully at the forefront of this debate.

“Tribal leaders bring unique perspective and concern about threats to our treasured landscapes,” Goldmark said in the statement issued jointly with the 10 tribes. “It’s an honor to join them in this important message about the growth of oil train traffic in our state and the threat it poses to public safety, environmental sustainability, and our quality of life.”

Swinomish Tribe Chairman Brian Cladoosby said it was time to move away from the Northwest’s “pollution-based economy” in general and oil trains in particular.

“We are the first peoples of this great region, and it is our responsibility to ensure that our ancestral fishing, hunting and gathering grounds are not reduced to a glorified highway for industry,” said Cladoosby, who is also president of the National Congress of American Indians (NCAI), in the statement posted at the website of the Washington State Department of Natural Resources. “Our great teacher, Billy Frank, Jr., taught us that we are the voices of the Salish Sea and salmon, and we must speak to protect them. If we cannot restore the health of the region from past and present pollution, how can we possibly think we can restore and pay for the impact of this new and unknown resource?”

Together they urged policy makers to take up critical regulatory issues surrounding the increased traffic of oil trains throughout the state of Washington.