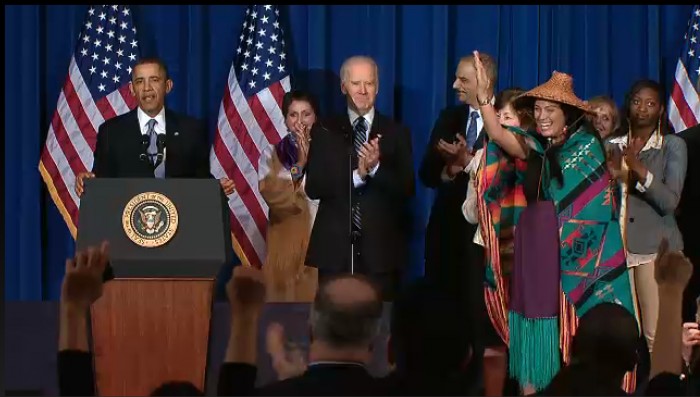 On March 8, 2013, President Barack Obama this morning signed into law the reauthorized Violence Against Women Act that includes tribal provisions.

Press release, December 3, 2014, National Congress of American Indians
WASHINGTON, DC – Vice President Joe Biden joined over 300 tribal leaders at the sixth annual White House Tribal Nations Conference today. At the opening of the conference, Vice President Biden delivered an impassioned speech about violence against women in Indian Country saying “The most horrific prison on earth is the four walls of an abused woman’s home. For far too many Native American women that is a daily reality.”
The Vice-President, who was the original author of the Violence Against Women Act and has been its most steadfast supporter over the past 20 years, was introduced by Councilwoman
from the Tulalip Tribes , “Vice President Biden has led the movement to protect women against rape and domestic violence.  Last year he helped pass the much needed protection to help Native women from violence.   Mr. Vice President, you are correct when you say no means no — no more abuse.”
Referring to the provisions added to VAWA in 2013 that allow tribal governments to prosecute non-Indian domestic violence offenders in certain cases, the Vice-President apologized that it took so long to give tribal governments the tools to hold offenders accountable in their communities, saying “as long as there is a single place where the abuse of power is excused as a question of jurisdiction or tolerated as a family affair, no one is truly safe, and we cannot define ourselves as a society that is civilized.”
The Vice President delivered a call to action saying, “Tribal governments have an inherent right, as a matter of fact they have an obligation, to protect their people. All people deserve to live free of fear.”  He urged all tribal governments to be prepared on March 7 when the law goes into effect to use their authority to aggressively prosecute domestic violence offenders. He stressed the need to change the culture that too often leaves victims asking what they did wrong and instead to focus on sending a strong message that violence against women is always unacceptable.
Vice President Biden also acknowledged that we have much more to do to protect Native women from violence including giving Alaska tribes the same authority and expanding the provision to cover sexual assault and other crimes. Biden called on Congress to appropriate the $25 million in grants authorized in VAWA 2013 to implement the new law.
Attorney General Eric Holder followed Vice President Biden, and strongly stated the Department of Justice’s commitment to improving law enforcement in Indian country, and to institutionalizing that commitment so that it will continue.  He announced that he has implemented a Statement of Principles to guide the Department’s work with tribal nations into the future.
Attorney General Holder also announced a new initiative to promote compliance with the Indian Child Welfare Act in partnership with the Departments of Interior and Health and Human Services.  Holder stated that the initiative is “working to actively identify state-court cases where the United States can file briefs opposing the unnecessary and illegal removal of Indian children from their families and their tribal communities.” Holder went on to explain that DOJ will work with its partners and tribes to “to promote tribes’ authority to make placement decisions affecting tribal children; to gather information about where the Indian Child Welfare Act is being systematically violated; and to take appropriate, targeted action to ensure that the next generation of great tribal leaders can grow up in homes that are not only safe and loving, but also suffused with the proud traditions of Indian cultures.”