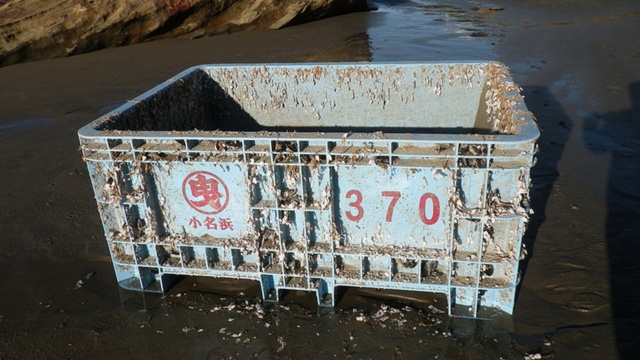 Winter storms off the Oregon and Washington coastlines are expected to bring a new wave of debris from the 2011 tsunami in Japan. Scientists say objects are already washing ashore – with potentially invasive organisms riding along.

In March, 2011 an earthquake and tsunami devastated a large swath of eastern Japan. The tsunami reached heights of over 100 feet in some places, washing large quantities of manmade materials out to sea. Japanese officials estimate that about 1.5 million tons of debris floated out into the Pacific.

Oregon State University marine scientist John Chapman questions the accuracy of that number, but says current tallies of what’s washed ashore on the U.S. West Coast are much lower than that.

“If we look at the amount of debris that we’ve found on the shore. And we try to estimate the poundage of debris and add it all up, it’s not even close,” he said. “So, where is it?”

Chapman says it very well could still be out in the ocean, waiting on the right combination of currents, winds and other factors to bring it ashore in the Pacific Northwest.

So far the tsunami debris has come over in waves. It started with buoys, polystyrene foam and two massive floating docks. The next winter, it was building materials, like lumber. Last winter, a parade of small boats started washing up.

And now the first large object of the season – a 4-by-5 foot shipping tote – has washed up near Oregon’s Seal Rock.

The common feature of all these items is the presence of coastal marine organisms that hitched a ride over from Asia.

“This is the biggest experiment in marine invasion ecology that’s ever happened. It’s unprecedented,” Chapman said.

He said open oceans are the marine equivalent of deserts: there’s nothing out there. At least, nothing of substance, nutrient-wise that coastal organisms would need to survive. This was the prevailing thought among marine scientists – until that first Japanese dock section washed up in June, 2012 on the Oregon Coast.

“That was the first time that anyone ever considered that marine organisms could drift across the ocean. It wasn’t as if they didn’t think about it, we assumed that it wasn’t possible,” he said.

As the years passed and the debris continued to circulate in the North Pacific, Chapman assumed the amount of living coastal organism would decrease. Again, he’s been proven incorrect.

“We’re still finding species that we haven’t seen before. It doesn’t make sense to us,” he said. “We shouldn’t be doing that, but it seems to be happening.”

The plastic shipping tote that washed up in Oregon in late November was covered in about 200 blue mussels.

The question is currently being studied by several groups using a variety of methods, from visual surveys to genetic testing.

But the organisms are very tiny and the West Coast is very large. And so far none have been found that can specifically be connected to the tsunami.

“If it was a herd of bison that came across, it would be a no-brainer; we could go out and find it if they got here,” Chapman said.

“But these things aren’t bison. They’re little tiny things – sometimes diseases and parasites. And even if they are here, sometimes we don’t find them for years.”

Despite the challenges facing scientists, Chapman said the waves of tsunami debris present an unprecedented opportunity. Between now and May, he expects to see another round data wash ashore on the coast of the Pacific Northwest.