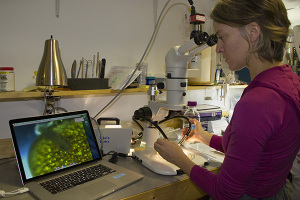 WSU toxicologist Jen McIntyre checks the condition of an embryo that was exposed to urban stormwater runoff. More pictures from the study can be found by clicking on the photo.

The National Oceanic and Atmospheric Administration (NOAA) biologist needs to do it without piercing the yolk sac so Washington State University (WSU) toxicologist Jen McIntyre can take a closer look at the embryo’s health and development, such as heartbeat, blood flow and eye size.

Linbo and McIntyre are looking at eggs that have been exposed to urban stormwater runoff collected from roadways in Seattle; they want to know if the embryos show signs of developmental toxicity.

In a partnership with the tribe, the project is part of an ongoing study by NOAA, WSU, U.S. Fish and Wildlife Service, and Environmental Protection Agency to better understand how untreated urban stormwater is affecting coho salmon during their freshwater life stages in urban Puget Sound watersheds.

While it may be obvious that polluted water may be hazardous to salmon, “some as-yet unidentified chemicals in runoff are prematurely killing adult salmon as they attempt to spawn in urban streams,” said David Baldwin, NOAA research zoologist who helped design the study.

Since 2011, the scientists have been conducting similar exposure tests on adult coho salmon, studying fish behavior and toxicity levels in the organs. They have profiled the baseline chemistry of urban runoff across multiple storms, spanning multiple years.

The scientists are looking at the effects of different dilutions of stormwater on embryos compared to embryos exposed only to the hatchery’s clean well water. The team also is monitoring the development of eggs exposed to full-strength stormwater first filtered through experimental soil columns filled with sand, compost and mulch, mimicking bioswale filtration systems.

As for the eggs, it will take more than one storm to tell the story.

“We expect it will take multiple short exposures before we see effects on the eggs,” McIntyre said. “If the contaminants target the gills, the liver or the heart of the adults, those organs were not yet developed when we did the first exposure to the eggs.”

“In actual urban spawning habitats, salmon embryos develop over a period several weeks, during which they are likely to experience repeated rain events,” added Julann Spromberg, NOAA toxicologist. “We want our study to reflect this reality of multiple exposures.”