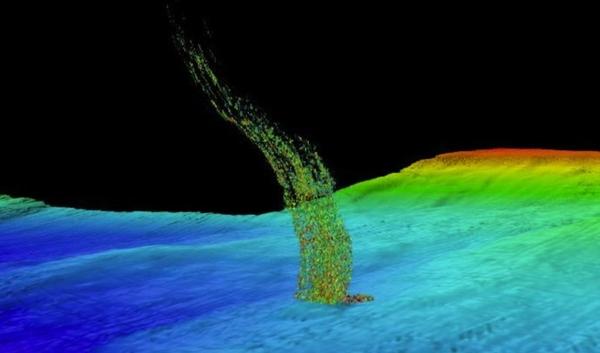 Sonar image of bubbles rising from the seafloor off the Washington coast. The base of the column is one-third of a mile (515 meters) deep and the top of the plume is at 1/10 of a mile (180 meters) deep. | credit: Brendan Philip / UW

SEATTLE — As the waters of the Pacific warm, methane that was trapped in crystalline form beneath the seabed is being released. And fast.

New modeling suggests that 4 million tons of this potent greenhouse gas have escaped since 1970 from the ocean depths off Washington’s coast.

“We calculate that methane equivalent in volume to the Deepwater Horizon oil spill is released every year off the Washington coast,” said Evan Solomon, a University of Washington assistant professor of oceanography and co-author of the new paper, which was published in the journal Geophysical Research Letters. The modeling does not indicate whether the rate of release has changed as temperatures warm, but it does strengthen the connection between ocean temperature and methane behavior.

Solomon and his colleagues first learned about the methane leaks when fishermen started sending them photographs of bubbles coming up out of the deep.

“They’re really low quality phone shots of their fish finders, but every single location they gave us was 100 percent accurate,” Solomon said.

On a cruise this past summer, Solomon and his colleagues gathered core samples from the ocean floor, about one-third of a mile deep, at the spots where the fishermen reported seeing bubbles.

And sure enough, mixed in among the sediment, were crystalized methane deposits.

“It looks like slushy ice,” Solomon said. But it certainly behaves differently. “If you took it from the sediment and lit a match or put a lighter on it, it will go into flames because of all the gas.”

Methane can exist in a gas, liquid and crystalline form. The crystalline version, or methane hydrate, occurs at cold temperatures and under pressure – conditions that can be found at certain depths of the ocean. But as deep sea waters warm, scientists believe those crystals will dissolve, releasing the methane in bubbles that can change ocean chemistry and contribute to atmospheric change once they escape at the sea’s surface.

“It’s a way to contribute to ocean acidification if you have a lot of this gas coming out and being oxidized in the water column,” Solomon said.

The methane release isn’t just happening in Washington waters, Solomon says. More sampling needs to be done but the same conditions for methane hydrate release exist from Northern California to Alaska. “So it’s not a Washington central thing,” says Solomon, who is looking forward to further study of this issue. “It should be happening off of Oregon, off of British Columbia as well.”

Other research has found similar patterns of methane release in the Atlantic and off the coast of Alaska.