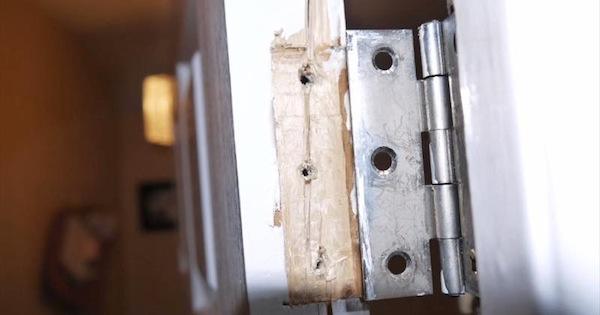 A pile of bedroom doors was building up outside the house.

A collection of old bedroom doors began to pile up beside our house. To the neighbors and anyone who walked by, it probably looked like a major home renovation was under way inside. In fact, that’s exactly what I told them.

But if anyone had looked a little closer, they would have noticed an odd similarity about each of those doors: They all had big, splintery holes in them toward the bottom, about the size of a man’s foot.

See, it wasn’t a home renovation after all. Inside my house, behind doors and windows that I would rush to close when the shouting started, a relationship was being ripped off its hinges. One by one, those doors had been kicked in during fits of rage by the man I lived with—and loved. He had a problem controlling his temper sometimes. At least that’s what he told me.

The real problem was that just about anything angered him. Inattentive waiters, surly sales clerks, slow drivers. Anyone who got in his way or didn’t give him due respect incurred his wrath. Especially me and my “controlling nature.”

Even though our relationship was splintering like that real and metaphorical pile of rotting wood outside, we continued to fake it and live up to everyone’s expectations of us as the happy little couple. We threw parties at our new home, invited friends over for barbecues and summer swims. No one really knew what was going on behind our slammed, kicked-in doors. By this time, I had been called a “fucking bitch” and “idiot” so many times that they now felt like endearments.

I had become the Great Pretender.

My sisters knew bits and pieces, but I didn’t tell them everything.  I was too ashamed for them to see that their strong, feisty sister had been reduced to this shadowy nub of a woman. My oldest sister was not fooled.

“Lynn, he’s crushing your spirit,” she would say.

My neighbors were not fooled either. I would later learn that I didn’t need to frantically shut the windows to soundproof his rage because they could hear him screaming loudly and clearly at me anyway.

There are many reasons why domestic violence victims try to hide the abuse from family, neighbors and friends. For me, it was shame and embarrassment that my “man radar” had been so far off. I was the smart sister, so how could I be so stupid?

Vivian Clecak is the co-founder and chief executive officer of Human Options in Orange County, an emergency shelter for battered women and children. She understands all too well why I covered up my abuse.

“Ours is a culture that makes a big deal out of romance—the fancy wedding, the white dress,” she said. “Women are considered responsible for relationships. So when something goes wrong, like abuse, the woman is ashamed and embarrassed. Not only does she blame herself, but society also blames her. Again and again, society asks: ‘What’s wrong with her?’ ‘What did she do to cause it?’ ‘Why did she stay?’ ”

Clecak said there is another dynamic in play, too, about why women pretend everything is perfect at home when it is far from it.

“The couple’s bond is very strong even when there’s abuse,” she said. “He promises it will get better, and maybe it will for four or five months. She desperately wants to believe him because it’s her home and her family.”

If you suspect a friend is being abused, Clecak said, start a conversation.

In my case, I’m not sure that would have helped. I wasn’t ready to give up my fantasy of the white picket fence just yet. We still had children to bring into the world.

Part 1: Domestic Violence: Every Ending Has a Beginning, and That’s a Good Place to Start Healing

Part 2: Domestic Violence: If the Abuse Is so Bad, Why Do You Stay?

Part 3: Domestic Violence: Women Must Never Forget How Powerful and Sacred They Really Are

Let’s help empower each other by keeping the conversation going about domestic violence. We invite you to share your story of abuse with us on Twitter at #WhyThisNativeStayed and #WhyThisNativeLeft, as part of the campaign started by CNN a few weeks ago, #WhyIStayed and #WhyILeft.

Lynn Armitage is an enrolled member of the Oneida Tribe of Indians of Wisconsin.