A fisherman stumbled upon a rock carving that appears to show a legendary battle in Quileute mythology. As historic finds go, it’s “the most important, at least in this modern day” for the tribe. 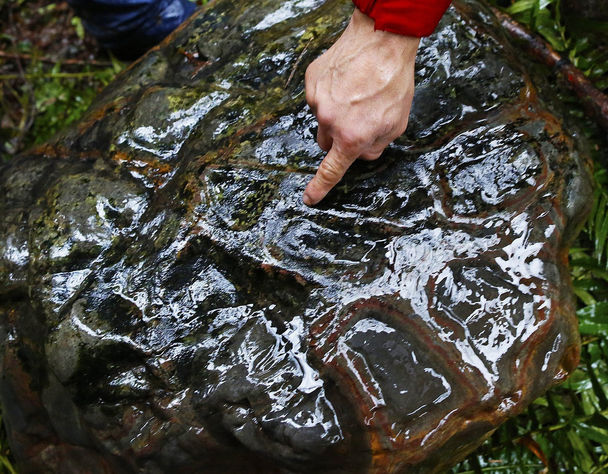 Mark Harrison / The Seattle Times
An old petroglyph found by a fisherman in the Calawah River was celebrated with a ceremony by a group of Quileute tribal members before it was moved to the tribal headquarters in La Push. State archaeologists authenticated the carving and think it may date to around or before the mid-1700s.

OUTSIDE OF FORKS, Clallam County — There hadn’t been any good fishing on the Calawah River the day last December when Erik Wasankari and his son Reid found the rock.

It was a damp, cold day when the pair, on their lunch break, saw the rock and walked into the river, which was running shallow, to inspect it.

It was big — about 2 feet in diameter, with a domelike top filled with grooves and small depressions. Reid scraped off some moss so they could see it better.

All Wasankari could make out were “just some triangles and rectangles and shapes,” but he realized they had found something special.

“The symbols that we saw were too unique,” said Wasankari, a 44-year-old contractor who grew up in the area and now lives in Gig Harbor.

The rock they stumbled upon appears to be a carving that depicts a legendary battle in Quileute mythology, according to tribal and state officials.

Chas Woodruff, chairman of the Quileute Nation’s Tribal Council, describes the historic find for the tribe as “ the most important, at least in this modern day.”

When tribal and state officials, including Woodruff and state Commissioner of Public Lands Peter Goldmark gathered Wednesday for a ceremony to celebrate the rock’s discovery, you couldn’t walk across the Calawah River. The mud-tinted river was square in the middle of a storm that was dumping several inches of rain on the region and sending whitecaps and dead trees hurtling downstream.

The rock — which could weigh up to 1,000 pounds — had been hauled up to the river bank by a power winch.

Standing near it just before the ceremony were Lee Stilson and Eugene Jackson. Stilson retired just last week as state lands archaeologist for the state Department of Natural Resources; Jackson is a Quileute tribal member.

The two talked about what they could see on the rock’s surface. Stilson pointed out the head of what is believed to be K’wati, a transformative figure in Quileute mythology. With his finger, Stilson traced K’wati’s head, beak and distinctive comb, and then K’wati’s tongue, which leads to another figure on the rock, believed to be the Red Lizard.

The tongue is a power symbol and weapon for Northwest tribes, Stilson explained. Jackson, who has done some carving himself, agreed.

“Anything that comes out of the mouth is an offensive design — that animal is showing his power,” Jackson said.

Stilson and Jackson wondered if the rock could have been a trail marker.

“On the 1893 General Land Office map, they show a trail here,” Stilson said.

As state archaeologist, Stilson helped authenticate the rock. Whoever carved it used not a metal tool but stone, he said. That means it’s a “pre-contact” artifact, one made before Europeans moved into the region. Stilson guessed it dates to around or before the mid-1700s.

Stilson described such a significant discovery as a gift to end his 44-year archaeological career.

“It’s a phenomenal work of art,” he said, more than once.

Jackson’s connection is more personal. He said the rock could have been moved downstream over the centuries from land where his ancestors lived. And he brought his 7-year-old son, Frank, to see the carving and show him “who he is, where he comes from.”

The Red Lizard, according to Quileute legend, made his home near the narrowest point of land between the Calawah and Sol Duc rivers and stopped people using it as a shortcut from one to the other. K’wati, a figure of good who was known as the “transformer” and turned the Quileutes from wolves into people, eventually killed the Red Lizard, who had a much poorer reputation.

“He was a very bad monster … his urine, actually, if you stepped on it, it would kill you,” Quileute Tribal Councilman Justin “Rio” Jaime told those gathered at the ceremony.

The rock will go on display in La Push, as a welcome addition to help tell the tribe’s history. Of this, the Quileute don’t have much — in the late 1880s, a European settler set La Push afire. Along with homes and fishing equipment, the tribe lost almost all its pre-contact artifacts.

But Marion Jackson, Eugene’ Jackson’s younger sister, who also came to the ceremony, doesn’t think of the rock as just something from the past.

“I’m excited,” said Marion Jackson, as she stood just a few feet from it. “I feel like our ancestors are definitely talking to us.”