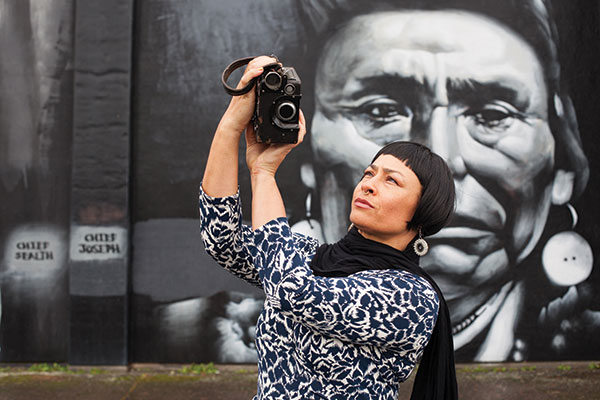 Last summer Tracy Rector spent three and a half weeks traveling 650 miles across the Salish Sea by canoe, recording the evolving relationship between tribal peoples of the Pacific Northwest and the waters they’ve called home for thousands of years. The journey was part of her forthcoming feature documentary, Clearwater, which Rector and co-director Lou Karsen started filming three and a half years ago.

Rector herself has Seminole roots, but she’s quick to outline the complexity of her identity. “I am French, Hungarian, Scottish, Irish, Choctaw, Seminole and African American. I identify as a Mixed Race Urban Native, more specifically. And I am a single mother of two amazing young men.”

In addition to filmmaking, Rector is co-founder and executive director of Longhouse Media, a nonprofit that documents the contemporary lives of Native people in the Puget Sound area. She’s a Sundance Institute Lab Fellow, a recipient for multiple awards in media and social justice, and serves on the Seattle Arts Commission.

“For me it’s not an option to be quiet,” she says.

Rector came to filmmaking circuitously. After burning out as a domestic violence advocate 14 years ago, she returned to school at Evergreen State College to study traditional medicine in the garden of a Skokomish elder, Gerald Bruce “Subiyay” Miller. While there, local filmmaker Katie Jennings approached Miller about documenting Miller’s life. He agreed— “’but only if a Native student can intern on the film, because our people need to learn the skills to tell our own stories,’” Rector paraphrases. “The door opened for me and I’ve been making films ever since.”

In 2008 she produced the coming-of-age documentary March Point, about three teenagers from the Swinomish reservation in northwest Washington. After running into trouble with the law and landing in drug court, the teens were offered the option to make a documentary, with the help of Longhouse Media, about the impact of oil refineries on their community. (It was the only Seattle documentary to be featured that year on the national PBS series Independent Lens.) Another of Rector’s documentaries, Unreserved: The Work of Louie Gong, about the Seattle artist and activist, screened in 2010 at Cannes.

With major support from PBS, Tribeca, Sundance and Washington Filmworks, Rector and Karsen will wrap up Clearwater this year and they’re planning a multimedia, interactive installation to coincide with the film’s release in January 2016. Rector will continue to program the “Indigenous Showcase,” a film series created in partnership with Northwest Film Forum, and is creating a new initiative with SIFF called 4th World to focus on Native content and to train youth and adult indigenous filmmakers, with additional support for female and LGBTQ indigenous artists.

Yet another one of her passions is Native Lens, a program hosted by Longhouse that provides education and technology to at-risk Native youth in both rural and urban areas. “My dream,” Rector says, “is to be a transformative force for good through art and arts activism.”