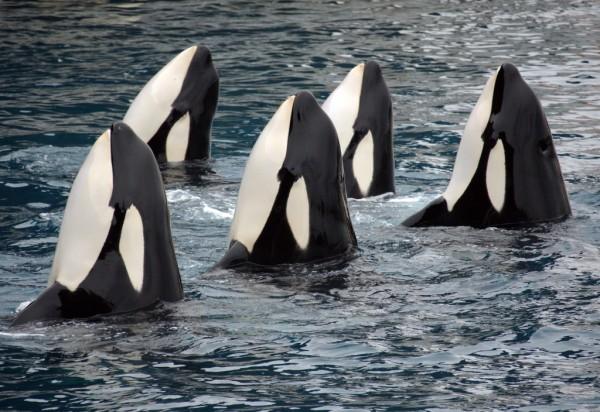 Orcas are an endangered species in inland waters of the Salish Sea, encompassing Puget Sound, the San Juan Islands and the Gulf Islands of British Columbia. (VALERY HACHE/AFP/Getty Images)

The last days of 2014 have brought glad tidings and great joy to those who follow and worry about the southern resident community of orcas (killer whales) that inhabit the Salish Sea, the inland waters of Washington and southern British Columbia.

A newborn orca was discovered Tuesday looking “healthy and energetic” and being snuggled by its mother off South Pender Island, just over the border in B.C.’s Gulf Islands. The discovery was made by Ken Balcomb of the Center for Whale Research.

“We’re excited!” said Howard Garrett of Orca Network.  “She (J16) sets a new bar, a new record for the oldest to give birth, by a year or two.”

The birth of J50 raises the southern resident community population to 78.

The southern residents were classified in 2005 under the Endangered Species Act at a time when the population of the great marine mammals had fallen to 78.

Orcas are particular about their diet. They feed off chinook salmon, in a region where salmon stocks have declined due to factors ranging from habitat destruction to pollution to bad forest practices to overfishing.

The orcas do not consume any of the millions of sockeye salmon that head for B.C.’s Fraser River each year through the Strait of Juan de Fuca and the Strait of Georgia between Vancouver Island and the B.C. mainland.  “We wish they would,” joked Garrett.

The region’s inland waters have two major populations of orcas.  The northern resident community spends July through September in waters of Johnstone Strait off northern Vancouver Island.  The orcas are renowned for rubbing against pebbles just offshore from the mouth of the Tsitika River near Alert Bay.

The diets of the southern resident and northern resident communities “are the same,” Garrett explained, “but their communication and call system are entirely different.  Their is no overlap, no interaction between the two communities.”

The birth of J50, in a month when the southern residents have been seen in both the San Juans and Gulf Islands, puts the spotlight on a major decision pending in Canada.

The giant Houston-based Kinder Morgan pipeline company wants to triple the capacity of the Trans-Mountain Pipeline, which transports oil from Alberta to a refinery in Burnaby, just east of Vancouver.  The completed pipeline would carry more oil than the controversial Keystone XL pipeline designed to link Alberta oilfields to the U.S. Gulf Coast.

The enlarged Trans-Mountain Pipeline would bring oil from Alberta’s vast tar sands project to the coast for export to Asia.

If the Kinder Morgan project goes through, an estimated 30 tankers a month — up from four at the present time — would traverse Haro Strait, a middle point in habitat for the southern resident community and the marine boundary between the U.S. San Juan and Canada’s Gulf Islands.  Both countries have national parks and monuments in the islands.

A major environmental battle over Kinder Morgan is underway north of the border.