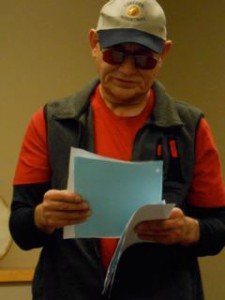 NWIC student Ed Hill recites his poetry during the Hibulb Cultural Center’s December poetry series. Students penned poems during a NWIC poetry class and recited for the first time to the public for the first time.
Photo/ Bob Mitchell

Students in a Northwest Indian College poetry class had a chance to showcase their creative prowess during December’s Hibulb Cultural Center’s poetry series. The class, composed of novice and beginner poets, presented a collection of work created during the course to the public for the first time.

Professor Lynda Jensen, who teaches the class, is an avid writer and poet herself, encouraging students to create poetry with depth and emotional response.

“One of the exercises that we did in class was to make a list of 35 words we like. We would pass the list to someone else, and that person’s job was to turn the list into a poem,” said Jensen.  A poem by student Talon Arbuckle using the list of 35 words technique was performed during the event.

“I asked the students to give me a list of 35 words that they associate with themselves, with their personal identity. From these lists, I made a poem for each student. I read these poems to them at the event. That was one of my favorite parts of the evening, extolling and featuring them within poetry,” Jensen.

Students Ed Hill and Crystal Meachem, both newcomers to poetry, found inspiration in the structure of poetry. Hill’s poems focus on his connection to nature, and discovered poetry to be an inviting and inspiring form of communication. Meachem, who did not enjoy poetry at the start of the class, explored different forms of poetry to learn the deeper meanings embedded in style and word choice.

“As an enthusiastic optimist, Crystal enjoys the word search when creating something sublime. She said that when she writes poems, she lets the words flow out. Then she re-reads to see if it is sublime yet. If it isn’t she sits there, frustrated and confused, until she finds the right words to make the poem work perfectly,” said Jensen.

Novice writers Bobbi Jones and Marci Fryberg use poetry regularly as a way of self-expression. Jensen describes Frberg’s use of poetry as, “strong, inviting and eschew the exclusivity that poetry so often inflicts on readers. Her meanings are clear and her metaphors recognizable. A quiet and private person, Bobbi was uncertain about performing her poetry in public. She gave me permission to read two of her poems. After I finished reading her poem “Howling,” an appreciative hush fell over the room. Bobbi writes powerful personal poetry,” explained Jensen.

Other students use poetry as a mean of healing. Student Katie Longstreet used the skills she learned in class to write poetry as a way to process difficult emotions, drawing inspiration from strength and courage. She shared several poems that focus on the isolation individuals who endure trauma experience.

While poetry for many of the students became a way to communicate emotions and thoughts that could not be described otherwise, student Talon Arbuckle found a comedic undertone while developing his poetry.

“Talon discovered his interest in poetry on the first day of class. He shared several poems that he wrote, including one that was a response to an assignment that students write a poem as if they were someone else. Talon decided to write a poem as if he were Mike Tyson. He used only published quotes from Tyson. The poem was powerful and very well received,” said Jensen.

“The evening was full of emotion, support, beauty and laughter. It was the perfect capstone for our course,” Jensen said. “We are grateful to the Hibulb Cultural Center for hosting the event. We plan to create a chapbook with the poems we performed that night. We will make these available to the community when they are complete.”