Inter-American Commission on Human Rights has been studying issue in B.C. for 2 years 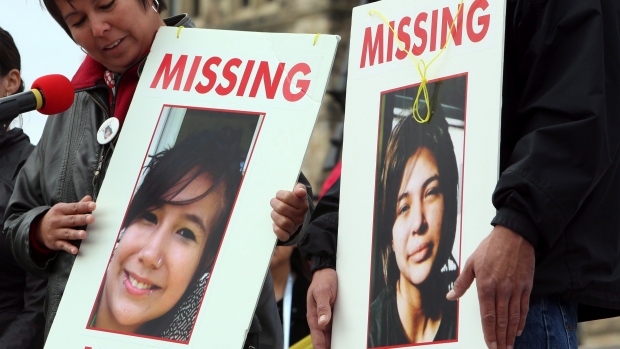 The Inter-American Commission, which is affiliated with the Organization of American States, has issued a report on murdered and missing indigenous women. (Fred Chartrand/Canadian Press)

A report into missing and murdered indigenous women in B.C. is breathing new life into an acrimonious debate between advocates of a public inquiry and the Canadian government, which says it is taking action to address the problem but refuses to call an inquiry.

The report by the Inter-American Commission on Human Rights (IACHR), which is affiliated with the Organization of American States, said it “strongly supports the creation of a national-level action plan or a nationwide inquiry into the issue of missing and murdered indigenous women and girls.”

The report came to several conclusions, including:

The report acknowledged the steps already taken by Canadian governments at both the federal and provincial levels to address some of the problems and challenges that indigenous women face.

Last fall, the federal government committed to a five-year plan to address violence against aboriginal women and girls.

Today, the office for Kellie Leitch, the minister for the status of women, said the government was reviewing the report.

“Our government has received the IACHR’s report and is reviewing the report’s findings, comments and recommendations.”

The report’s recommendations include calls for:

NDP aboriginal affairs critic Jean Crowder said it was “unconscionable” for the government to ignore growing calls for a public inquiry.

“It is time for the prime minister and [Aboriginal Affairs Minister] Bernard Valcourt to stop ignoring the sociological phenomenon of missing and murdered indigenous women and take federal action to address the crisis,” Crowder said in a written statement.

“The prime minister’s shocking indifference to this ongoing tragedy is not only a national disgrace, but an international embarrassment,” Bennett said in a written statement.

Mobile users, view a chart of homicide rates among Canadians vs. aboriginal women

The IACHR has been studying the issue for more than two years.

Its investigation was requested by the Native Women’s Association of Canada (NWAC) and Feminist Alliance for International Action (FAFIA) in March 2012.

At a press conference in Ottawa to respond to the report, Dawn Harvard of the NWAC called it “truly groundbreaking.”

“This report is the first in-depth examination of the murders and disappearances by an expert human rights body. These women and girls are being stolen from our families, from our communities, and it is time that somebody is taking it seriously,” Harvard said.

Prime Minister Stephen Harper said in reaction to the recent slaying of Tina Fontaine that the issue of missing and murdered indigenous women was not part of a “sociological phenomenon,” but rather a crime and should be treated as such.

Holly Johnson, of the Feminist Alliance for International Action, said the commission has spoken “loudly and clearly.”

“Canadian governments have a lot of work to do,” she said. “Contrary to our prime minister’s assertion, that this is not a sociological phenomenon … [It] goes way beyond policing. Social and economic factors must also be addressed.”

The report includes recommendations on how governments at both the federal and provincial/territorial level can address the situation.

The Conservative government has so far refused calls for a national public inquiry on the issue, saying it is more interested in taking action. Last month, when CBC’s Peter Mansbridge asked the prime minister about launching a public inquiry, Harper said: “It isn’t high on our radar, to be honest.”

“The actions Harper is prepared to engage in are very slim, uncoordinated,” said Sheila Day, chair of the FAFIA human rights committee, at a press conference held by FAFIA and the Union of B.C. Indian Chiefs. Day said the report makes it clear that the consultation and participation of indigenous women and associations is essential.

At the press conference, Grand Chief Stewart Phillip said the fundamental issue is racist attitudes toward indigenous women and girls. “We are going to continue to pursue this issue until there is justice,” said Philip.

Canada’s premiers are expected to hold a national roundtable on murdered and missing aboriginal women on Feb. 27 in Ottawa.