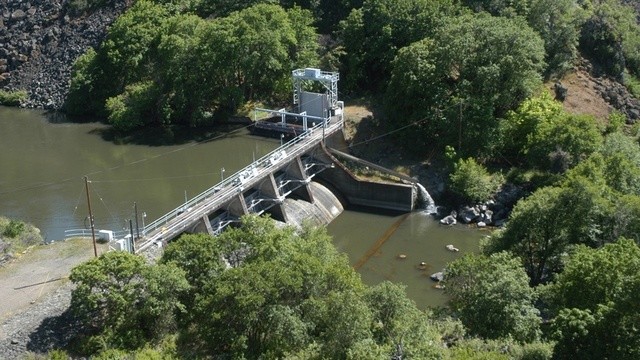 PacifiCorp’s Copco 1 dam on the lower Klamath River is one of four hydro dams that would be removed to facilitate fish passage under the pending Klamath water deal.
Amelia Templeton

Supporters of a trio of agreements meant to settle the rancorous water disputes in the Klamath Basin are gearing up to take another run at getting Congressional approval for the deal. A Klamath bill by Oregon’s Democratic senators was not included in a massive funding measure passed in the frantic final hours of the last Congress.

Now – amid signs that support for the agreements is growing, the spotlight is turning toward the region’s Republican congressman.

The failure of the Senate bill that would have implemented the Klamath water agreements left a big question mark: what would happen now?

Among stakeholders in the region, the answer was largely that, somehow or another, the deal would move forward.

“There is no alternative on the table other than going back to the kind of chaos we saw a decade ago,” he said.

Farmers and ranchers in the Klamath have waged a long and bitter battle with fishermen and Indian tribes over the region’s scarce water, with periodic irrigation water shut-offs and fish die-offs raising the stakes.

Over the course of years, the three water agreements were hammered out as the various stakeholders eventually negotiated compromises most felt they could live with. One federal official said what finally brought everyone to the table was the realization that “part of something is better than all of nothing.”
,
Now – with three interlocking agreements awaiting Congressional approval – stakeholders say it’s crucial to wrap it up.

“This is how we’re going to have stability in resource management in the Klamath Basin as we move forward,” said Greg Addington, who heads the Klamath Water Users Association. It represents farmers and ranchers on the federal Klamath Irrigation Project. Addington says, at this point, making major changes in the deal isn’t feasible.

“As you look at the complexity of these issues and the work that went into crafting these agreements over the last eight or nine years – we’ve been at this for a while – it just makes you more confident that you’ve really crossed all the t’s and dotted all the i’s and looked at all the potential solutions,” he said.

In recent months, a growing number of previously-skeptical groups have come to back the water deal, including the Klamath Falls City Council, the Klamath County Chamber of Commerce and the Klamath Cattlemen’s Association.

One key player who hasn’t yet signed on is Republican congressman Greg Walden. The Klamath is in Walden’s district and so far he’s had reservations about the agreements, in particular the part that would remove the four hydropower dams on the Klamath River. The dams have blocked fish passage for more than fifty years.

As more Klamath agriculture groups have swung their support to the deal, they’ve urged Walden to get behind it. But if Walden hopes to substantially change the dam removal part of the deal, Don Gentry, who chairs the Klamath Tribal Council, would beg to differ.

“It’s pretty clear that the parties are all on board that that’s a part of the package and without that dam removal component, the agreements will unravel,” he said.

Gentry says removing the dams is crucial to restoring the endangered fish populations the tribes have a treaty right to.

Just as the new session of the US Senate convened this month, Oregon Democrats Ron Wyden and Jeff Merkley re-introduced their Klamath water bill that died last session. Merkley says with the probability of another dry summer approaching, time is running out.

“This has to happen in legislation, to lock in the components as a group,” he said. “And so we could have a major water war or water catastrophe, however you want to put it, for the ranching-farming community if we don’t get this done.”

While there are still parties opposing the agreements – the Klamath County   Commission and the Hoopa Indian tribe among them — the success of this effort would seem to hinge on Greg Walden’s support. Walden’s office declined to comment except to say he’s been meeting with stakeholders and “shares a common goal of finding a viable path forward.”