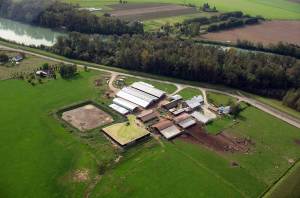 An aerial photo shows a manure lagoon at a dairy farm adjacent to the Nooksack River. Courtesy of Kim Koon.

Whatcom County’s booming dairy and agricultural industry has cost Lummi Nation shellfish harvesters millions of dollars already, and a recent closure of shellfish beds in Portage Bay is adding to the tally.

Manure from dairy cows is discharged either directly or indirectly into the Nooksack River, which flows into Portage Bay. In September, the tribe closed 335 acres of Portage Bay shellfish beds to harvest because of high fecal coliform levels that exceeded National Shellfish Sanitation Program standards. Continued poor water quality led to the closure of two additional areas in December, bringing the total to nearly 500 acres of shellfish beds that are unsafe to harvest. More areas may have to be closed in the coming months if conditions are not improved.

Lummi shellfish harvesters lost an estimated $8 million in revenue from 1996 to 2006, when 180 acres of Portage Bay shellfish beds were closed for the same reason. The Lummi Nation is pressing state and federal agencies to do a better job of keeping dairy farm manure out of the Nooksack River.

“The tribe has been working since 2005 to avoid this very situation from occurring,” said Merle Jefferson, Lummi Natural Resources director. “We do not have jurisdiction to enforce county, state and federal laws in the watershed so we must rely on Whatcom County, the Washington Department of Ecology, the Washington Department of Agriculture and the EPA to act. The federal agencies have a trust responsibility to ensure that the Lummi people can exercise their treaty rights to harvest shellfish in our usual and accustomed areas.”

Whatcom County is home to about 46,500 adult dairy cows, which can each generate 120 pounds of manure per day. Dairies store the waste in unlined lagoons that can leak 900 gallons of manure into the ground every day, according to a recent ruling under the Resource Conservation and Recovery Act.

Concentrated Animal Feeding Operations (CAFOs) – defined as industrial-sized livestock operations that confine animals to barns or feed lots – are required by the federal Clean Water Act to have National Pollutant Discharge Elimination System (NPDES) permits that regulate how much waste they release into the water.

However, none of the dairy farms in Whatcom County have an NPDES permit.

Smaller farms don’t meet the definition of a CAFO unless they have a documented discharge. Most claim not to spill manure into the water supply, said Andrea Rodgers Harris, a lawyer with the Western Environmental Law Center. Nevertheless, manure is being discharged into the Nooksack River and the groundwater. The Sumas-Blaine aquifer in Whatcom County is the most contaminated aquifer in the state.

“Ecology has concluded that the high nitrate pollution in the aquifer is largely due to manure pollution from dairy farms,” Harris said.

The federal Environmental Protection Agency (EPA) is working with the state Department of Ecology, which administers the permits, to enforce the Clean Water Act to “the fullest extent possible using available resources,” said Dennis McLerran, EPA Region 10 administrator, in a Dec. 9 letter to the Lummi Nation.

McLerran said that a farm that contributes significantly to pollution, even if it does not meet the definition of a “Concentrated Animal Feeding Operation,” can be required to get an NPDES permit. Animal feeding operations that are not significant polluters are covered under Clean Water Act provisions relating to nonpoint sources.

“We will continue to work with Ecology to take appropriate enforcement actions to bring such facilities into compliance with the NPDES general permit,” McLerran added.

The state is considering legislation, drafted at the direction of Gov. Inslee, to require all applicators of manure to be certified and licensed by the state

Another concern is pollution from Canadian dairy farms in British Columbia. A Vancouver Sun investigation learned that extremely high levels of fecal coliform bacteria are traveling across the border into Whatcom County via streams from the Fraser Valley.

In December, McLerran and EPA Deputy Regional Administrator Michelle Pirzadeh met with their counterparts in Canada to discuss updating a statement of cooperation between EPA and Environment Canada.

“During our meeting I stated the high priority EPA places on recovery of shellfish beds in Puget Sound, and specifically identified water quality problems and shellfish bed closures near the border as one of EPA Region 10’s highest priorities for our agencies to focus on in the coming year,” McLerran said.

In addition to working with EPA and Ecology, the Lummi Nation participates in the Whatcom Clean Water Program and the Whatcom County Portage Bay Shellfish Protection District, and is working to raise awareness about waste management practices.

Lummi also is seeking relief for fishermen affected by the closure. About 200 Lummi families make their living harvesting shellfish, and as many as 5,000 community members rely on the shellfish beds for ceremonial and subsistence purposes.