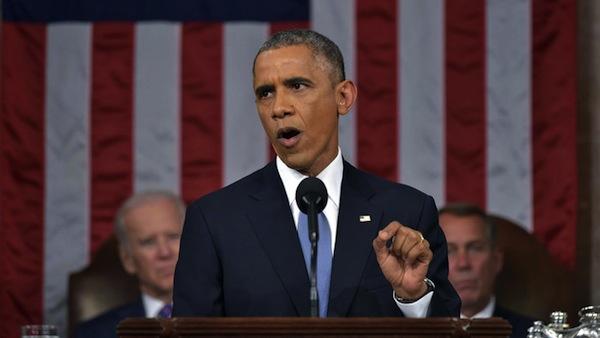 Mandel Ngan/AP
President Barack Obama delivering his State of the Union address for 2015.

Though the State of the Union address focused primarily on the economy, President Barack Obama underscored the importance of continuing to deal with climate change and its attendant issues, calling this the biggest threat that modern life faces.

In his hour-long speech, Obama devoted just over two minutes to the subject of climate change—both reiterating that it is real, and listing the major measures that the White House has taken to alter and adapt to its course.

“No challenge—no challenge—poses a greater threat to future generations than climate change,” Obama said near the end of the address. “2014 was the planet’s warmest year on record. Now, one year doesn’t make a trend, but this does—14 of the 15 warmest years on record have all fallen in the first 15 years of this century.”

Answering critics who have said that Congress cannot make scientific rulings because legislators are not scientists, Obama said he is relying on the know-how of the scientists researching and compiling the data. He highlighted some of the measures that his administration has undertaken, such as the landmark emissions agreement reached recently with China.

“The best scientists in the world are all telling us that our activities are changing the climate, and if we don’t act forcefully, we’ll continue to see rising oceans, longer, hotter heat waves, dangerous droughts and floods, and massive disruptions that can trigger greater migration, and conflict, and hunger around the globe,” Obama said. “The Pentagon says that climate change poses immediate risks to our national security. We should act like it.”