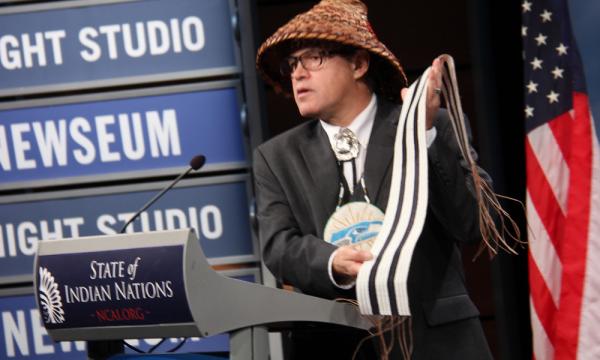 Vincent Schilling
National Congress of American Indians President Brian Cladoosby held up an Iroquois Wampum belt as a gesture of mutual respect between all Indian Nations during his State of Indian Nations address last week.

The National Congress of American Indians President Brian Cladoosby (chairman of the Swinomish Nation) delivered the State of Indian Nations Address Thursday in Washington, D.C. at the Newseum Knights television studios to a full house of members of Congress, senior Administration officials, and leaders of tribal nations.

The event, which was livestreamed on the NCAI channel, was viewed all over Indian country with a reported 50 or more ‘viewing parties’ all over the country.

In addition to Cladoosby’s call on Congress and the Obama Administration to act to improve tribal economies, invest in education, and support innovation, Senator John Barrasso (R-WY) the new chair of the Senate Committee on Indian Affairs, delivered the Congressional response.

“Today, I bring a simple message from the tribes of the 21st Century: We must tear down barriers to growth, simplify regulations that are limiting opportunities, and acknowledge that tribes have the capability as governments to oversee our own affairs,” said Cladoosby.

“Congress and the Administration need to find ways to help bring federal agencies out of the 19th Century and into the 21st Century. We need them to be partners for growth and not barriers to growth.”

When Cladoosby remarked on the historic visit by President Obama to the Standing Rock Sioux Nation last year, he mirrored the words of President Obama by extending a personal invitation to Speaker Boehner (R-OH), Leader Nancy Pelosi (D-CA), Majority Leader Mitch McConnell (R-KY), and Minority Leader Harry Reid (D-NV) – as well as every Member of Congress to visit Indian country in 2015.

“Make it a goal to come to Indian country this year,” said Cladoosby.

Before outlining the plan and discussing the top level priorities of the NCAI Cladoosby personally remarked about the appreciation he had for his own father and for the contributions of the recently passed activist and leader Billy Frank Jr.

“As Billy put it, he wasn’t a policy guy, he was a getting arrested guy,” to which Cladoosby made the light hearted comment that though Billy was arrested more than 50 times for exercising treaty rights, Cladoosby would not be able to match the arrest record.

Cladoosby stated the priorities for the NCAI in 2015 to include their recent 130 page report The FY 2016 Indian Country Budget Request; Promoting Self-Determination, Modernizing the Trust Relationship, outlining a plan for funding the federal government’s trust responsibility through the budget process.

He also remarked on Congress to advance tribal tax reform to enable tribes to raise tax revenue free from overlapping state taxation, and to create incentives for business and jobs.

Other topics of importance introduced by Cladoosby were asking the federal government to partner with the private sector to increase broad band in Indian country, extending access to capital by recognizing the equal status of tribal governments to access tax exempt bonds and ensuring tribal inclusion in the New Markets Tax Credit Program, energy reform and the passage of Indian energy legislation.

Cladoosby also called on Congress and the Obama Administration to ensure that tribal nations should “have a seat at the policymaking table” by consulting with tribes on all policy issues such as the Keystone Pipeline, renewable energy, health care, and education.

Cladoosby emphasized the importance of Education in Indian country and asked Congress to reauthorize the Elementary and Secondary Education Act and should enact legislation that supports Native language programs.

He also expressed thanks to President Obama for introducing that the first two years of Community College should be free.

“I applaud President Obama’s proposal to make the first two years of tribal and community college free. It will finally make k-14 education a reality,” he said.

During the address Cladoosby also called on the Washington Redskins to change their name stating the #Redskin name to be is “the most offensive name to an American Indian. He also later held up an Iroquois Wampum belt as a gesture of mutual respect between all Indian Nations.

After Cladoosby’s address, Senator Barrasso delivered a congressional response to which he outlined his visions on energy and natural resource development, healthcare, juvenile justice, and tribal self-governance.

“The relationship between the United States and Indian tribes has not always been positive – and has not always served the people of Indian country well… As President Cladoosby stated, ‘we are not where we used to be.’

“My main priority is to help the people of Indian country live better lives. There are two tribes in my home state of Wyoming: the Eastern Shoshone Tribe and the Northern Arapaho Tribe. The tribal leaders of these two tribes have stated to me over the years how important good jobs, health care and public safety are to their communities,” Barrasso said.

“Addressing these fundamental needs can contribute significantly to improving the lives of Indian people. As Chairman of the Committee on Indian Affairs, my top priorities are jobs, energy and natural resource development, healthcare, juvenile justice, and tribal self-governance,” he remarked.