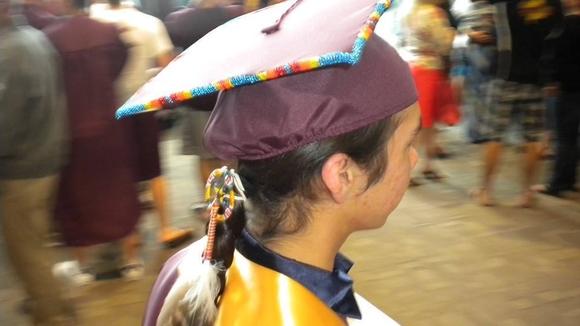 Change.org
A Native American group in North Dakota has won the fight for students to wear eagle feathers to graduation ceremonies.

After conversations with the Native American Parent Committee, a more than 20-year-old policy at Grand Forks Public Schools is changing and Native American students will be allowed to wear eagle feathers on their graduation tassels.

“We are in unanimous consensus that our district’s high schools will allow Native American students, who have earned the eagle feather honor, to wear their eagle feather attached to their cap’s tassel during high school graduation ceremonies,” says a letter to the committee from Dr. Larry P. Nybladh, superintendent of schools.

The social media world was happy about the change in policy as well. Leah Thaldorf @leahjoy0523said: “Thank you GF public schools for being willing to learn about why eagle feathers are sacred and a cultural right #LetTheFeathersFly.”

Others were proud of the Natives who stood up and made it happen. Dani @xodanix3said: “#LetTheFeathersFly is another example of Natives making things happen. When you stand up for what you believe, you can make change.”

In his letter, Nybladh even commented about the learning process. “The input received during the Native American Parent Committee meeting on January 14, 2015, regarding the sacred history, symbolism, and origin of the eagle feather is useful. In a follow-up meeting with my administrative staff who were in attendance at the meeting, I understand the meeting was an opportunity for constructive and meaningful dialogue.”

Before the decision was even made Tracy Jentz, Grand Forks Public Schools Communications Coordinator, told ICTMN that the “administration has a greater understanding of the eagle feather” after meeting with the committee. She said the meeting was “very informative” and that the parent committee provided information “about the significance and history of the eagle feather” that administrators had not been aware of before.

Other Twitter users thanked the school for the change. Twyla @Indigeniasaid: “As a former long-time resident of GF, I commend the @GFPublicSchoolsfor their decision. #RightSideOfHistory #LetTheFeathersFly.”