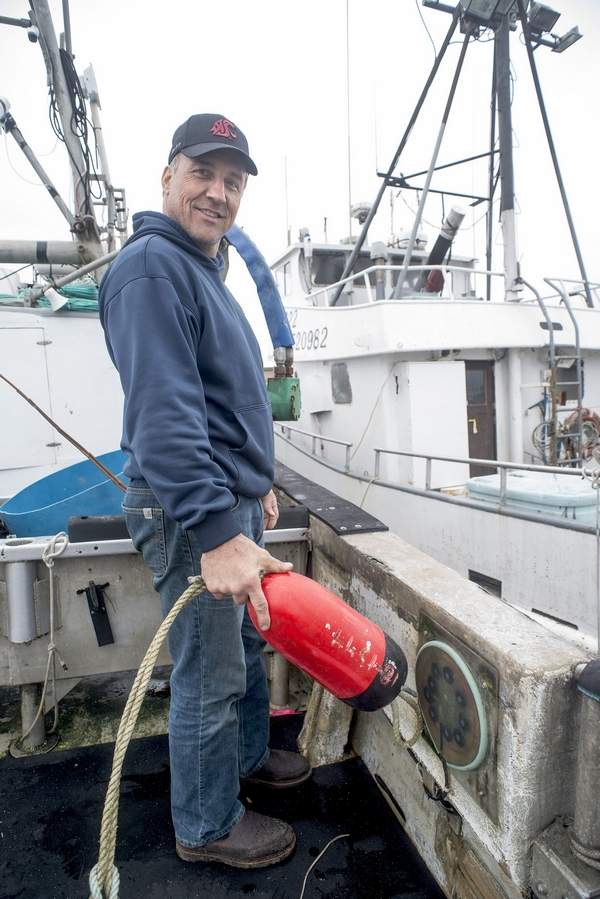 OLYMPIC PENINSULA — Many eyes have been on the Quinault Indian Nation as it tests technology that could help dramatically improve rule enforcement in Washington’s $62 million commercial crab fishery.

Three Quinault fishermen have been using an electronic crab pot monitoring system to track gear use. This entails placing quarter-coin-sized radio frequency tags in their crab pot buoys over the summer and since November. As the pots were pulled aboard, they scanned the buoys in front of a sensor: “Basically like you’re scanning groceries at the store,” said Quinault fisherman Pete Wilson, who was one of the three participants in the pilot program. The sensor transmitted the identification number and the GPS location to a computer.

With every pot registered to only one owner, fishery managers hope this will be a simple way to track boat activity and gear use.

“It would solve some pretty significant issues we face in the crab fishery,” said Dan Ayres, coastal shellfish lead biologist with the Washington Department of Fish and Wildlife.

As things stand currently, both tribal and non-tribal commercial crab fishermen looking to cheat the system and steal gear and crab can, for the most part, get away with it. Fishermen work at night and “guys that have no scruples come along and fish other guys’ gear,” Ayres said. “Unless someone is right there in the middle of the night and knows what’s going on, it’s almost impossible for us to make a case. …Because fishermen know we can’t do anything about it, they don’t necessarily report [incidents] to us.”

WDFW enforcement officers will hear about stolen gear from time to time, but the traps are in the ocean and the ocean is never still. Besides, whales tangle in pots, debris snags them, storms move them.

The Quinault Indian Nation is working with the non-profit EcoTrust Canada to process the data it collected. The pilot program ended in January. No final report or numbers have been made public yet though Joe Schumacker, QIN marine scientist, expects a report in March.

“If it works well, we’re hoping to have it on all fishing boats in the future and would love to see it used by the non-tribal fishermen as well,” Schumacker in an article in the Winter 2014/15 Northwest Indian Fisheries Commission News.

In an phone interview, he said it is something he has been pushing for the last decade. It is something fisheries in British Columbia have utilized and recently the idea seems to be gaining traction in the states, Schumacker said.

“I don’t think it’s all the way there,” Wilson said about the equipment in a phone interview Feb. 3. But he thinks it’s close.

“I’d say 90 percent of our guys are probably going to want this implemented,” he said. “There are one or two who’d probably prefer that it would not, for their own personal reasons.”

But he and the others don’t have anything to hide.

For fishery managers like WDFW, the technology would mean wading through massive amounts of data, something they don’t currently have the staff for, Ayres said. And there is a daunting cost to fishermen.

“If it wasn’t slightly over $10,000, it would certainly eat up most of it,” Wilson said regarding the expense per boat.

Schumacker didn’t have a cost estimate yet, but said it would have to be well under $10,000 to be affordable to fishermen.

Cost is one reason that WDFW has yet to implement similar monitoring though it has examined the possibility before. With that kind of price tag, it’s a hard sell, Ayres said.

The benefit of the monitoring would primarily go to those in the industry, but since they would also have to bear the bulk of the cost, the technology won’t become mainstream unless the fishermen support it.

Still, Ayres said, “it’s something that’s slowly becoming more common in other situations in other states.”

In theory, as it gains traction elsewhere and becomes standard: “It gets better and slowly gets cheaper.”

But he thinks the department will see more support as younger, more tech-savvy fishermen enter the fleet.

“We’ve got fishermen who still don’t have answering machines and, God forbid, a cell phone or an e-mail address,” he said.

Even now, they are only just beginning to look at requiring an electronic log book instead of paper log books fishermen currently maintain.